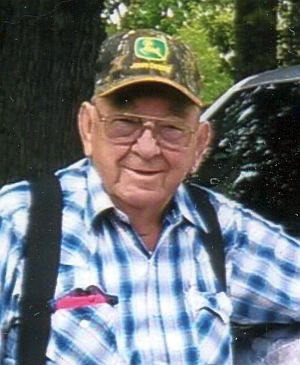 Born in Francisville, Indiana on December 23, 1934, Paul was the son of Matt and Amanda (Ramey) Beaver. He grew up in Knox, Indiana and attended California Township schools.

In his early years he enjoyed dancing, playing cards and roller skating. He was involved in 4-H with his children. Paul started working as a mechanic, then a Union Millwright Worker for Local 1076 in Greenwood, IN, as an auctioneer for 63 years owning Beaver’s Auction Service in Culver and running the North Judson Livestock Market. He was really a jack of all trades.

Paul was a hard worker and instilled these traits into his children. Even after his retirement he still went back to work as a millwright in his 80s. He was compassionate, generously giving and he never met a stranger. Children were drawn to his kind nature and his grandchildren knew he would give them the world if they only asked. But don’t think he didn’t have his ornery side at times.

He enjoyed going to other auctions and working on tractors, cars, and machines. And man did he love to drive and be on the go, even if it was just into town for a Coke.

Paul is survived by his wife, Lana of Culver; his children: Paul J. (Virginia Davis) Beaver Jr. of Plymouth, Doug (Karen) Beaver of Leiters Ford, Ron Beaver of Indianapolis, Dale Beaver of Port Charlotte, FL, and Ryan Beaver of Plymouth; his stepchildren: Rick (Marcy) Stamper of Knox, Brian Stamper of Michigan, Kelly Stamper of Hamlet and Kimberly Minix (Storm Minix) of Hamlet; many grandchildren and great-grandchildren as well as numerous nieces and nephews.

He was preceded in death by his parents; former spouse Jennette (Burkett) Beaver; siblings Bill and Bobby Beaver; daughter-in-law Donna E. Beaver and many half brothers and sisters.

Burial will follow in the Crown Hill Cemetery in Knox.