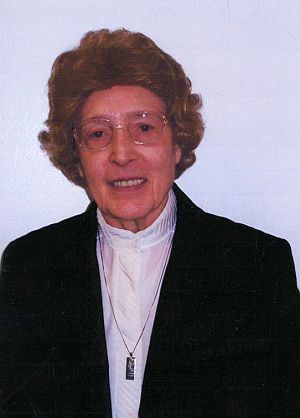 Sister Georgine Schleper (Regina), Poor Handmaid of Jesus Christ, died on September 13, 2022 at the Catherine Kasper Home, Donaldson, Indiana.
She was born in Trenton, Illinois to Henry George and Catherine Therese Schleper (Rakers) who preceded her in death along with her brothers Anthony, Alphonse, Herman, Albert, and George and her sisters Bernadine Emig, Josephine Rehkemper, Christine Hilmes and Sister Teresa Schleper, PHJC.  She was the eighth child of ten children.  She is survived by her niece, Sister Loretta Schleper, PHJC and 26 nieces and nephews.
Entering the Poor Handmaid Community on August 23, 1947 as Regina, she took the name Sister Georgine and professed her vows on June 25, 1950.
Sister Georgine became an RN in 1953 having graduated from St. Joseph School of Nursing, Fort Wayne, Indiana.  She received her B.S. in Nursing from St. Francis College also in Fort Wayne.  Sister Georgine also received her certification to become a Chaplain.  As Chaplain she ministered at St. Elizabeth Hospital, Chicago, Illinois; St. Francis Medical Center, Peoria, Illinois; Mercy Healthcare, Homewood, Illinois; and Carlyle Health Center, Carlyle, Illinois.
In 2011 Sister Georgine retired to the Catherine Kasper Home at The Center at Donaldson to be near her sister, Sister Teresa Schleper, PHJC.
Wake and funeral Monday, September 19, 2022 at Ancilla Domini Chapel, Donaldson, Indiana, 9601 Union Rd., Plymouth, IN 46563 will be held from 9:30-11:00 am (EST). The Mass of Resurrection will be celebrated at 11:00 am.
Burial will take place in the Mt. Carmel Cemetery, Donaldson.
For those unable to attend in person, the Wake Service and Mass of Resurrection will be livestreamed at www.poorhandmaids.org/live.
Memorial contributions may be made to the Poor Handmaids of Jesus Christ, PO Box 1, Donaldson, Indiana 46513 or on www.poorhandmaids.org<http://www.poorhandmaids.org>.
Condolences may be sent to the family through the website:  www.johnson-danielson.com<http://www.johnson-danielson.com>