PHS welcomes Langowski to the sidelines 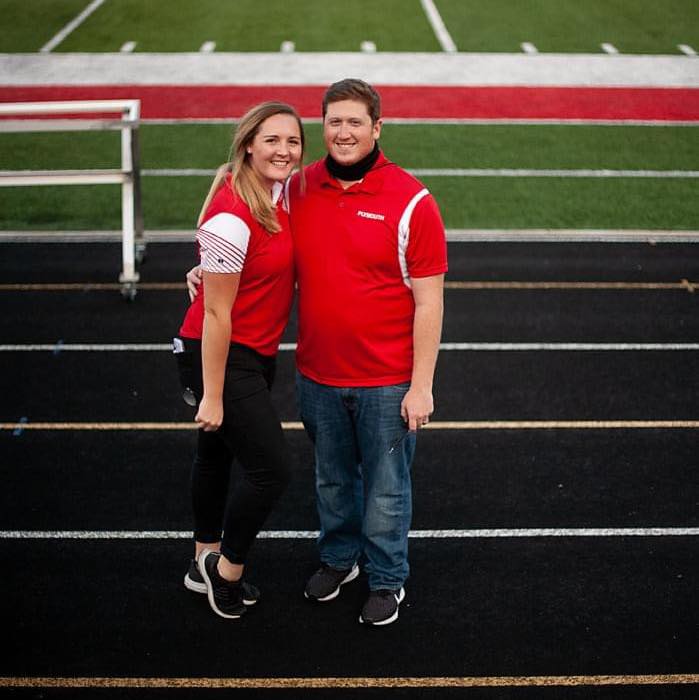 PLYMOUTH — Plymouth high school will welcome a new coaching face to the sidelines this season as Brenna Langowski will take over the cheerleading program this coming season.
Hitting the ground running for the upcoming football season has been her goal and “Moratorium Week” — the IHSAA’s yearly mandate for a week’s “vacation” with no contact between coaches and players in all sports for the week of July 4 — has Langowski itching to start back up.
“It’s moratorium week and I can’t message the girls about anything and there are so many things I want to message them about,” said Langowski. “I’m always making a to-do list.”
Langowski was born and raised in Minerva, Ohio
“I’ve cheered throughout my life from elementary school through college,” she said. “I come from Minerva high school where cheerleading was our main sport.”
She went on to the University of Mount Union to pursue a degree in criminal justice and continue cheering this time for a football national champion, and one special player in particular.
“My husband played football there and that’s where we met,” she said.
Brenna is a social worker out of Starke County and her husband Nick is a deputy prosecutor for Marshall County and is the head coach for the seventh-grade football team and assistant with the eighth-grade basketball team at Lincoln.
They have a 10-month-old son Patrick.
Langowski brings a passion for the sport after a life of involvement and is excited about the opportunity at Plymouth.
“I love everything about it. Getting to cheer on others and the way it builds you up,” she said. “My long-term goal is not just to make the girls better athletes and maybe get them to be collegiate cheerleaders themselves but I want to build up their self-confidence.”
“My coaches taught me that to be good you have to do x, y, and z,” she said. “But they were also there to support me and have an open and honest relationship to build me up for the future. I feel that’s what brought me to what I am today.”
One of Langowski’s goals is to emphasize the athleticism of her squad.
“I would love to have the community recognize (cheerleading) as a women’s sport and see we are out there working every day like all the other sports,” she said. “We go from April to March which is the longest season of any sport.”
“We need to build the core, the legs, the upper body because we have to hold humans,” said Langowski. “Other sports they hold rackets and footballs or whatever but we hold actual humans. That is difficult.”
Teamwork is also a major building block.
“You have a flyer, a base, and a back spot,” said Langowski. “Flyers are up in the air doing the stunt, the base is holding them up and the back spot is holding it all together almost like the quarterback.”
“I want us to get back on top with stunting, technique, and being sure that we are supporting each other.”
“Team bonding isn’t just for the beginning practices but for the entire season,” said Langowski. “Mainly it’s all girls on the team and they are all in high school so there is going to be some drama so you have to really work through all of that together and learn that we confront our problems and come out stronger on the other end.”
She’d also like to see more men get involved.
“I’d like to create some traditions I’d like to get more guys involved,” she said. “With males we are able to hit some bigger and better stunts. We are able to add more dynamics.”
“One thing to note is that male cheerleaders get better scholarships than girl cheerleaders,” she said with a laugh. “I would love to create a competition team one day and get us known throughout the state so they can be seen by collegiate coaches and our kids can get those scholarships.”