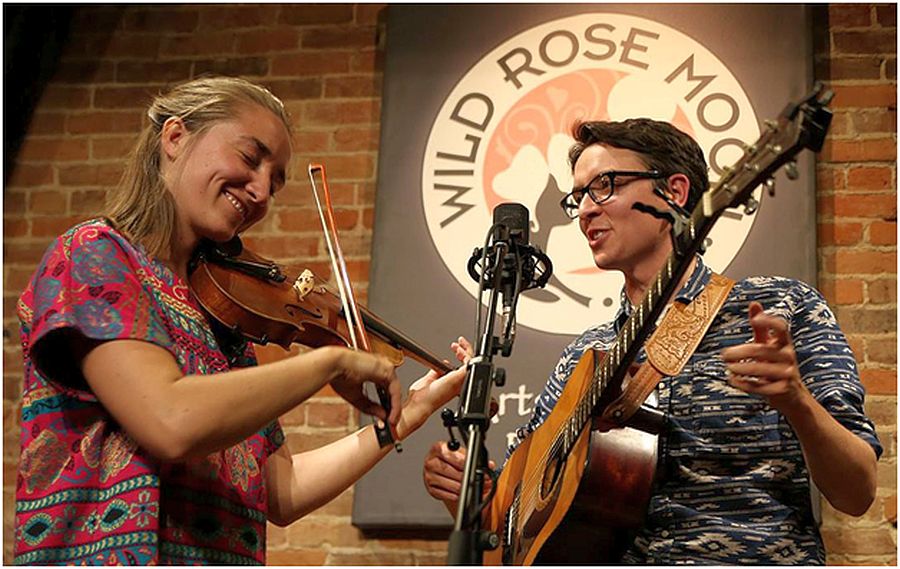 “When I first experienced this musical duo at the Moon, I knew they were onto something special.  Julie Bates and Andrew Morris literally electrified the audience with their brand of tongue-in-cheek storytelling, hambone body-jinx, and professional and exacting musicianship – their chemistry is infectious, like watching or listening to old time comedy duo, like George Burns and Gracie Allen, though with a modern musical change-up—like The Smother’s Brother’s gone twisted. ”That’s Wild Rose Moon director George Schricker waxing about one of his favorite acts to play at Wild Rose Moon, the Matchsellers.  “Andrew’s a local performer from Warsaw, Indiana and Julie is from Kansas City.  They first met while studying abroad in Leipzig, Germany, and it’s been kismet on the stage ever since.”  In fact, before COVID hit, the Matchsellers were sailing, traveling, and performing on stages all over the country, including West Virginia’s acclaimed, Mountain Stage, an entertaining and educational radio show that is heard around the world.  Julie is an accomplished violinist/fiddler and Andrew is a remarkably adept guitar player.  Nonetheless, they have a penchant for making up wild and wacky music, including their song, Pigeon and a Dove, which was recorded live in September of 2017 at the Moon and is available to view at Wild Rose Moon Media YouTube.  In the lead-up to the song, Andrew discusses his consternation about finding out that the German people have the same word for both the pigeon and the dove.  He goes on to explain that this disturbed him so much that he just had to write a song about it.  And so he sings, in mock consternation, as Julie saws the fiddle “sweetly” beside him:

“Talba, that’s the word in German

For both a pigeon and a dove–

One is a flying rat,

The other is a symbol for peace and love.”

Usually, at some point, Andrew will also introduce the audience to a little “hambone,” during which he plays his body rhythmically by slapping at his chest, his hands, his head, and his cheeks becoming a one-person rhythm section.  In addition, the set often contains a song about the Mentone Egg Queen or one about Dirt and Beard Hair.  Of course, alongside all this absurdist humor is a remarkable knowledge of the classic bluegrass idiom, with break-neck guitar solos and remarkable fiddling from Julie.  The Matchsellers have produced 4 albums, Kosciusko County, Songs We Made Up, Bluegrasstronauts, Sawdust Boys Sweet! and most contain their original songs.  They have also appeared at the John Hartford Memorial Festival in Bean Blossom, The Tri-State Bluegrass Festival, and the Folk Alliance International Conference in Missouri.   They’ll be in concert at 8:00 pm, Friday, July 1st, for two short sets and  with a short intermission for cool flavors in cups available from Beary’s Ice Cream Shop!  Tickets are $15 at ASK for Flowers, Culver Coffee Company, www.wildrosemoon.com, and Eventbrite.