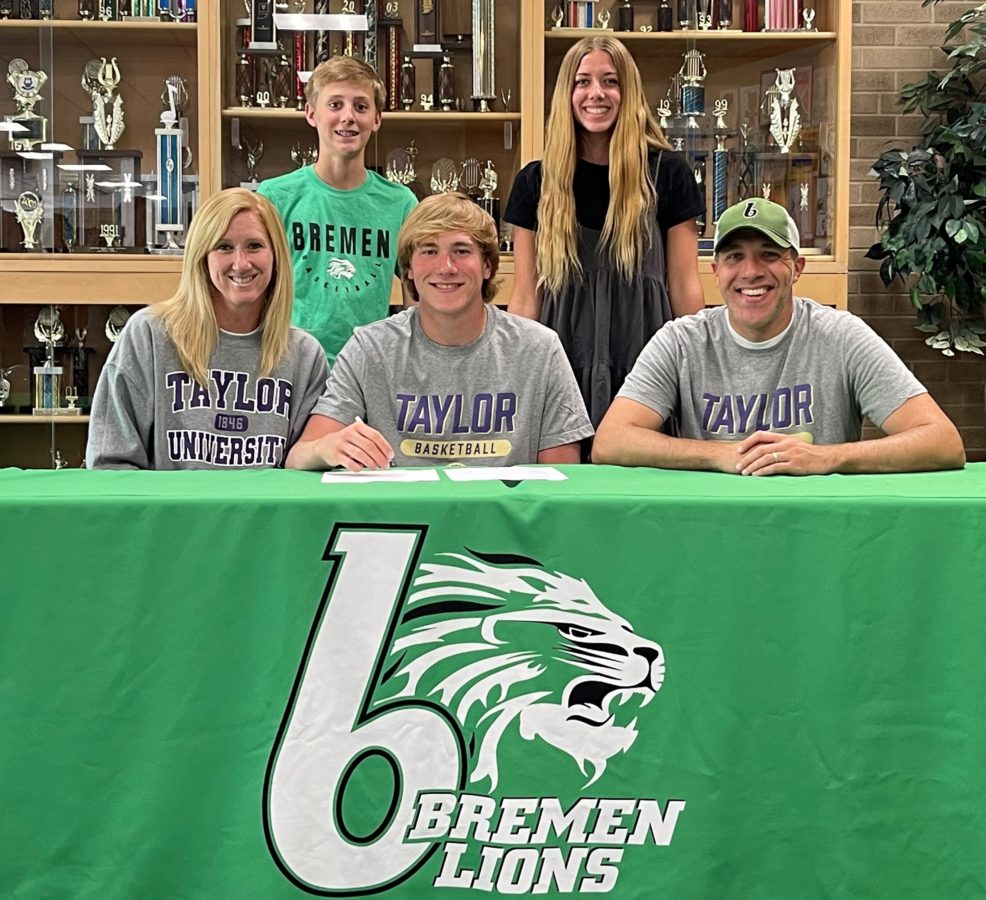 BREMEN — Carson Miller has signed a letter of intent to attend Taylor University located in Upland, Indiana, where he will play basketball for the Trojans.
After receiving Northern Indiana Conference (NIC) honors as a junior, Carson was one of only eight players named to the All-NIC’s 1st Team.
Carson became Bremen’s second all-time leading scorer and finished his high school career with 1,167 points behind only Cory Reed (Class of ‘94). Miller became the 4th player to reach the 1,000-point plateau in school history joining an exclusive group with Reed, Adam Mark (class of ‘00), and Matt Box (class of ‘17).
The 4-year varsity letter winner received Indiana Basketball Coaches Association (IBCA) All-State honors during his 2021 and 2022 seasons. Hoosier Basketball Magazine invited Bremen’s 2-time Most Valuable Player to their work out of the top 60 players in Indiana. The 2-time captain was also honored with IHSAA Sportsmanship Award during his senior year and led the team to its first winning season since 2009 and most conference wins since joining the NIC in 2016.
Playing #1 singles as a senior for Bremen Tennis, Carson helped lead Bremen to its second consecutive regional championship and a #23 ranking in Indiana. During his career, the Lions owned an overall record of 69-17 including three NIC championships and Bremen enjoyed its first sectional championship since 2003.
Miller was also a 3-time All-NIC honors recipient and was selected three times to the Indiana High School Tennis Coaches Association All-District team.
A three-sport athlete for the Lions, Carson also participated in track and field.
Academically, Carson carries a 3.88 GPA ranking him 14th in the class of 2022. While earning NIC Academic honors, he was one of only 40 players statewide to be named to the IBCA Academic All-State 1st team. Carson plans to study business at Taylor University.
Carson is the son of Matt and Brita Miller.
“Carson will be a terrific addition to the Taylor Men’s basketball team and to Taylor University,” said Bremen tennis coach Kevin Hickman. “He has always been an overachieving athlete and an excellent student. I feel fortunate for having been able to coach him throughout his outstanding tennis career. I have watched his basketball career very closely since he was in elementary school. I have no doubt Taylor will be pleasantly surprised with the basketball player, student, and person they are getting in Carson.”
“Carson has worked extremely hard to earn this opportunity and accomplish his dream to play college basketball,” said Bremen basketball head coach Matt Miller. “He has been an outstanding ambassador for Bremen basketball, and he will continue to do the same at Taylor.”