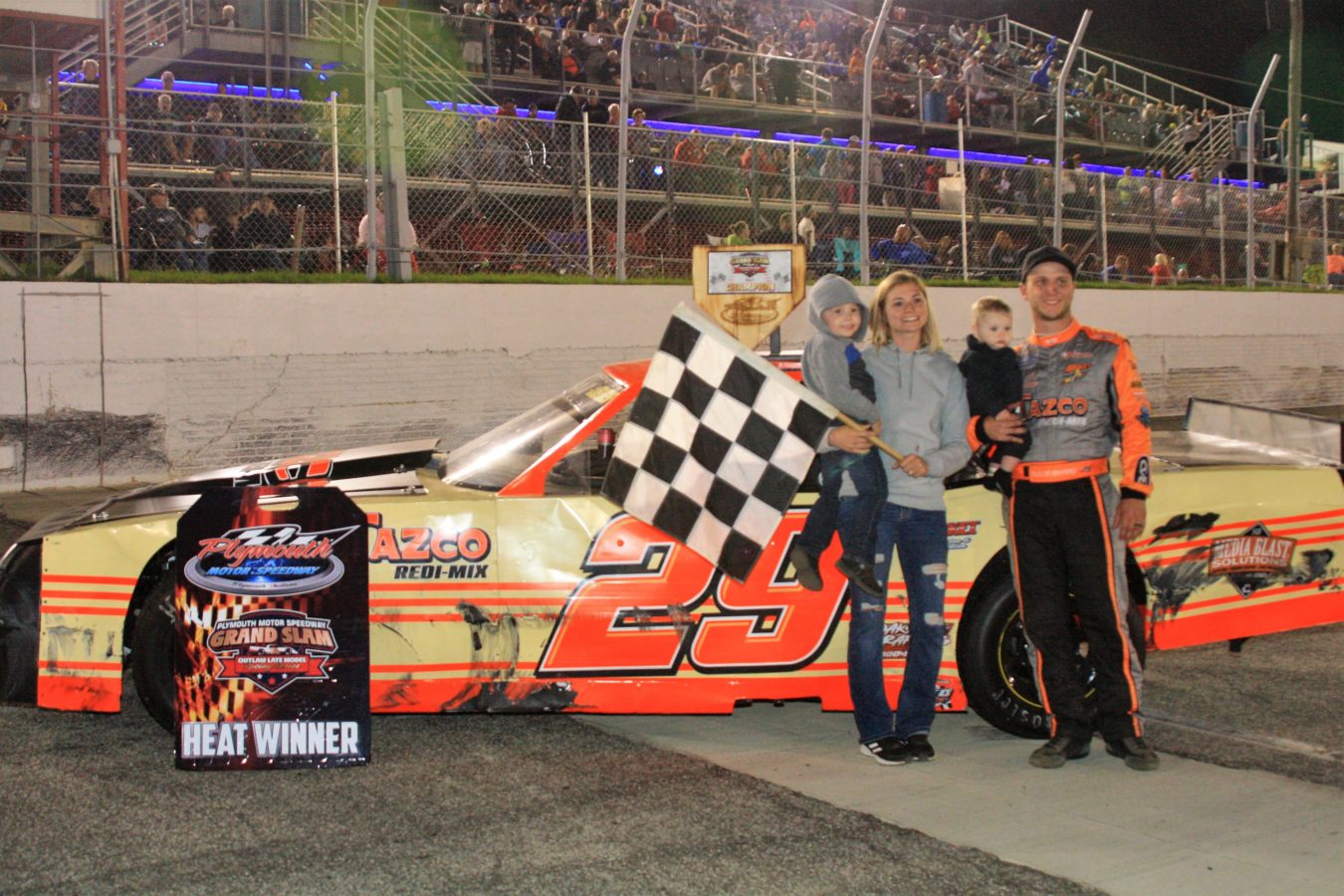 PLYMOUTH — As the gates opened for the double header Grand Slam weekend the drivers and fans were treated to the new and improved Plymouth Motor Speedway. From new lawn chair seating in the grass to a new concession stand the fans were thrilled to see the hard work from the Sauer Family.
Friday Night action saw the Mini Stocks bring 22 cars to the track with Dustin Williams setting a new track record. Feature time it was all the Shane and Audrey Eldridge owned #81. Share hired hot-shoe Austin Maynard to drive the car and Austin did not disappoint. Austin won the Mini Stock Feature and parked it in the Bran Roofing Victory Lane. The Mini Stock B Feature was won by Kane Lackey.
The Hornets took to center stage with a stout field of 45 cars parked in the pit area. After qualifying Dakota Milbourn set a new track record in the JJ’s Towing #101. Come race time these guys and gals went three-wide all over the place and treated the fans to an amazing race. John Woods climbed from the car in Bran Roofing Victory Lane holding up the Crown Trophy of Mishawaka hand-made trophy and screamed “We did it” to the crowd of onlookers.
Saturday was a day thousands of fans have been waiting for all winter. The Grand Slam Outlaw Late Model Series saw 36 Outlaws show up and take to the track. Over 4000 fans watched the Techworks Trailer Sales Qualifying and what a roar when the #24 of Tyler Roahrig clocked in at a 12.125. Moments later the #14 of Mark Shook took to the track and blasted to the top of the leader board with a 12.09. The crowd stood on its feet as Mark drove past to show the excitement. A pair of last chance races took place to set the 24 car field with Zack Cook and Jack Ladis the winners. The field came out to be personally thanked by track Owners Kevin and Brandy Sauer. Promoter Tony Eldridge thanked the drivers on the race communication radios and gave the command to fire the engines. As the green flag flew the drivers roared to life. Matt Frazier and Adam Terry traded the lead a few times before Adam Terry took the point. Adam looked to be on rails as he held off hard charges from JR Roahrig and then Tyler Roahrig. Adam slipped up with a handful of laps to go and Tyler Roahrig went to the inside for the pass and the lead. Tyler held on to win the 1st Grand Slam Race. Adam Terry finished second, Tyler Roahrig 3rd, Brian Berkager 4th, and Mark Shook 5th.
The 40 Street Stocks saw Brandon Zachary shoot to the top of the speed charts to take the new track record and fast qualifier award from Crown Trophy of Mishawaka. As the race set the pace the racing was intense with Brock Ganus and Shawn Amor coming deep in the field to work towards the front. After a few early cautions, the racers settled in the groove and Austin Maynard worked his way to the lead. Austin had to hold off some of the best Street Stock Racers around to pick up his 2nd Grand Slam Win of the weekend. As Austin climbed out of the car to the delight of the fans, he thanked the near-capacity crowd for coming to support the show. Second place finisher Brock Ganus was thrilled with the day stating he could not wait to return. Third went to Shawn Amor, 4th to Jeff Stetler, and 5th to Andrew Coates. The Street Stock B Feature saw some door-to-door racing lap after lap. The man on a mission was the #88 of Terrence Hesters. T Bone went to the top shelf and made pass after pass to take home the top honors. T Bone was offered to take the tail of the A-main and respectfully declined. The Street Stock feature ended the night with Chris Milligan and Michael Moore battling lap after lap. At the checkered flag, Michael Moore went to the Bran Roofing Victory Lane.
Promoter Tony Eldridge would like to thank the 143 drivers who took part in the first-ever Grand Slam race and the over 5000 fans who came in during the two-day show.
“It was a dream come true watching Kevin and Brandy’s hard work come into play,” he said. “Thank you to my team for working so hard all week and weekend to make this a success and thank you to the fans and drivers as none of this is possible without you.”
Friday, June 10th it’s the return of the Open Wheel Throw Down with the 500 Sprint Car Tour and the Midwest Modifieds. Also on tap will be the Street Stocks, Mini Stocks, FWDs, and Hornets. Race time is 7 p.m.