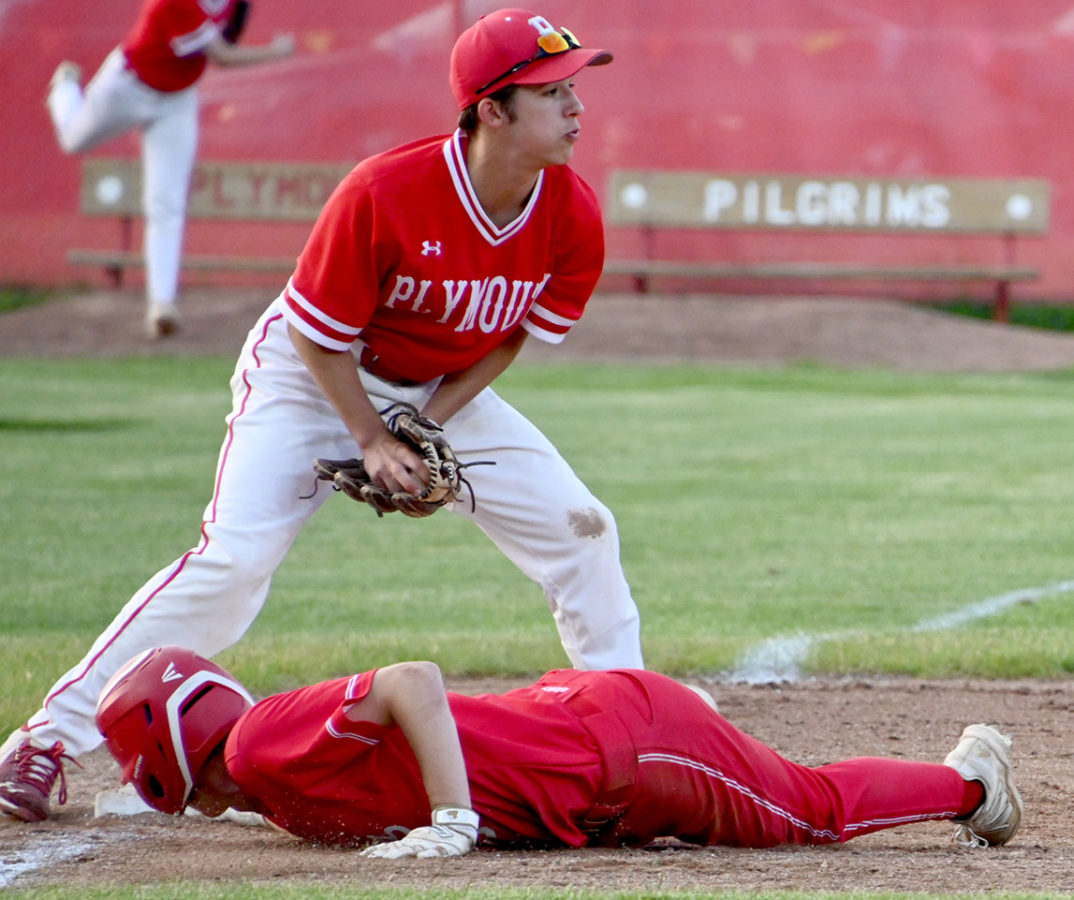 PLYMOUTH — In both teams’ final tuneup at Bill Nixon Field Monday night Plymouth took a win over Knox but the Redskins didn’t make it easy with the Pilgrims coming away with an 8-4 victory.
Plymouth honored seniors Tanner Feece, Skyler Aker, Bradey Pittman, Nate Derifield, Caden Weidner, and Andy Young before Monday night’s game.
Knox gave the Pilgrims all they wanted for the first five innings holding a 4-2 lead behind the right arm of Logan Taylor.
The Knox sophomore had the Pilgrims handcuffed for four and two/thirds innings striking out four, walking a pair, and scattering five hits.
Meanwhile, the Knox bats were finding a way with four straight hits in the third inning to plate three runs. The Redskins added another in the fourth with an RBI single by Grant Barnes, his second of the night.
The Pilgrims climbed back into it with a pair of runs in the third but five in the fifth would be the undoing of the Knox upset bid.
The key to the night, a defense that kept the Pilgrims in the game until the bats could wake up.
“We talked before the game about how that is going to be key headed into next week to make some plays,” said Plymouth coach Ryan Wolfe. “We had some weird balls early, some off the end of the bat, but Tanner made some pitches and defensively we played pretty well.”
In that time Taylor was dealing keeping hitters off balance and giving his team a chance.
“I thought we would get to their guy,” said Wolfe. “He mixed his pitches well and was doing some nice things but we did get to him there with the five in the fifth.”
“I was happy with our guys,” said Wolfe. “Tanner pitched well and Caleb (Bowling) came on there to close out the game.”
The combo of Feece and Bowling did keep their team in the game until the third time through the order in inning number five, the Pilgrims figured some things out.
“Again I would like to get on the board early,” said Wolfe. “Obviously, so that we can do some things but we have fought and stayed the course and done some things well. This team never quits they stay in the ball game, which bodes well for the tournament.
“That’s important. We are going to see a lot of different things.”
The Pilgrims started a winning streak at Bill Nixon Field where they are 5-12 this season and where they will open sectional play on Wednesday.
“You never know. You are getting every one’s best,” said Wolfe. “We have some horses that we are going to throw out their on Wednesday night and go from there.”
Plymouth is 13-13 while Knox is 5-20.
•PLYMOUTH 8, KNOX 4
at Bill Nixon Field
Knox 0 3 0 1 0 0 0 4-8-3
Plymouth 0 0 2 0 5 1 x 8-6-2
WP — Bowling (2-0). LP — Taylor (2-6). 2B — Wolfe (P).