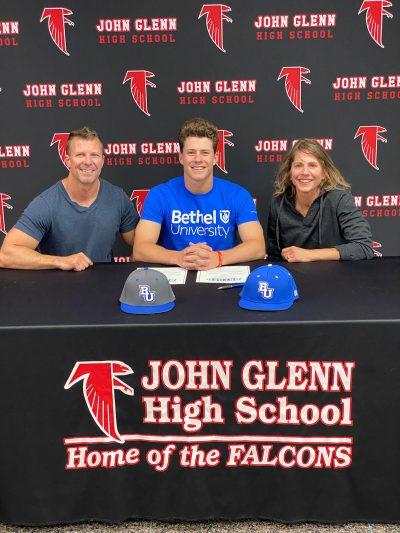 WALKERTON — John Glenn athlete Silas Kaser signed his Letter of Intent to continue his academic and athletic pursuits at Bethel University in Mishawaka.
Silas, a standout point guard on the basketball team as well as shortstop on the baseball team, will move on to Bethel in the fall to play not only basketball but baseball as well.
Silas has been a key piece of the John Glenn Basketball and Baseball Team for multiple years, being a part of two amazing seasons, some would say the best in school history in both with basketball ending with a record of 24-2 and baseball finishing with a 26-2 record.
Silas Kaser has been a major driving force in the success of those two seasons while being named a captain and winning many team awards and being named Honorable Mention in the Northern Indiana Conference in Basketball.