Early runs too much for Plymouth to overcome 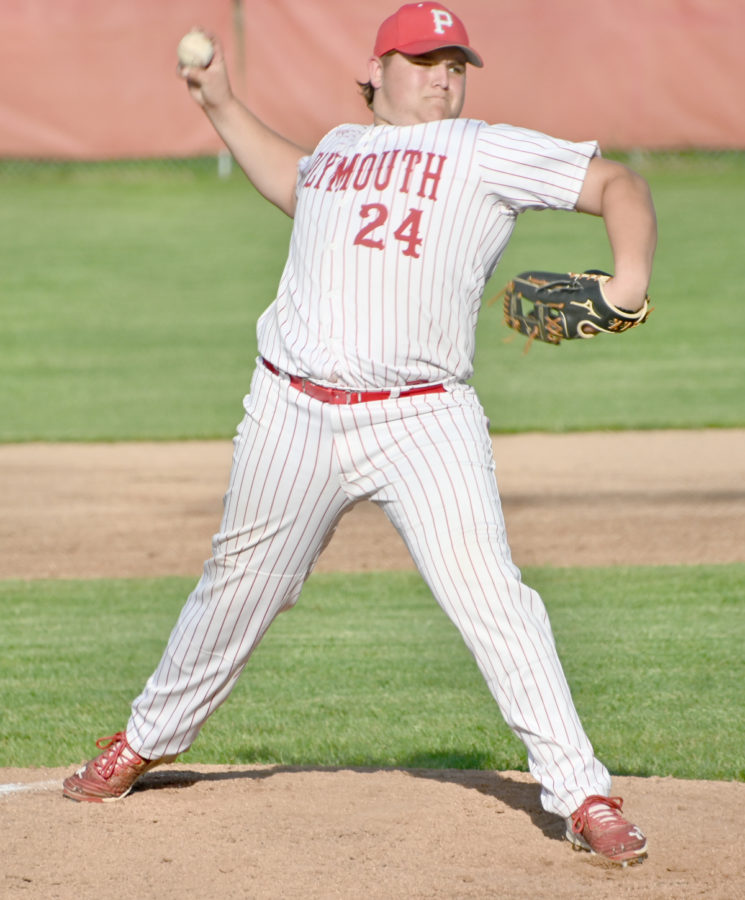 PLYMOUTH — Any way you look at it, it was far from a work of art but New Prairie will at least be content with a win over Plymouth 13-4 in a non-conference game at Bill Nixon Field.
It was exactly what you might expect from two teams fighting for their respective conference titles in a mid-week game when each has played a lot of games in a short span of time.
Pitching was far from sharp with 289 pitches being thrown in the two-and-a-half-hour game and only 150 of those for strikes. New Prairie pitchers walked nine and hit two Plymouth batters. Pilgrim pitchers walked six and hit two.
“I was talking to (New Prairie head coach) Mark (Schellinger) before the game and they are in the midst of the same thing we are,” said Plymouth head coach Ryan Wolfe. “You could see tonight with some of their pitching they were running guys out there to save some arms. Going into this game my plan was to get our guys (the regular starters) one at-bat and see where we were.”
“We had guys ready to go on the bench to give them a break,” he said. “I’m tired and I haven’t played, they’ve played four games this week and we have a really big one tomorrow. I thought we’d give them a little break and a little re-set. Our younger guys did a great job, made some big plays, and did a good job of hanging in there.”
Early it was deja-vu all over again as New Prairie was able to strike early and often for eight runs in the first three innings and the Pilgrims managed just one hit in that time span
“We got down 8-0 and left the bases loaded three times,” said Wolfe. “We couldn’t get the big hit after being down early to put some more pressure on them.”
Plymouth battled back from an 8-0 deficit to plate two in the fourth and two in the fifth, but in each inning the Pilgrims left the bases loaded.
“We got it there and we left the bases loaded at 8-4,” said Wolfe. “We took advantage of some things. We continued to battle. Our kids have done that all year, stayed in the game, and battled back.”
“You like to think that you get back to 8-4 and keep it there for a couple of innings,” he said. “Caleb (Bowling) went out and put some zeroes up and kept us where we needed to be. We have to try to find a way to squeeze across a couple more runs in those middle innings.”
Plymouth got another solid performance on the mound from Caleb Bowling on the mound as the winner at Warsaw on Monday came back to throw three more scoreless innings to keep Plymouth in the hunt.
Koan Deon got a second start behind the plate and several other Plymouth call ups showed promise for the future.
“We are coming to the end of the year and we are trying to put the best guys on the field,” said Wolfe. “To bring those guys up gives me a lot of options to do some things in the game defensively if I need to and have a few more bats on the bench.”
Friday night ends a streak of seven games in seven days for the Pilgrims with Wawasee coming to Bill Nixon Field for a “must-win” NLC game.
“That’s what it comes down to,” said Wolfe. “We are playing to win the conference now. It will be a good battle. We’ll be ready to go.”
The Pilgrims (11-11) have a 5:30 p.m. start time Friday night at Bill Nixon Field with Wawasee.
•NEW PRAIRIE 13, PLYMOUTH 4
at Bill Nixon Field
N. Prairie 3 1 4 0 0 0 5 13-11-2
Plymouth 0 0 0 2 2 0 0 4-4-6
WP — Kinney. LP — Bockman. HR — G. Ryans (NP). 2B — Newman 2 (NP), D. Ryans (NP).