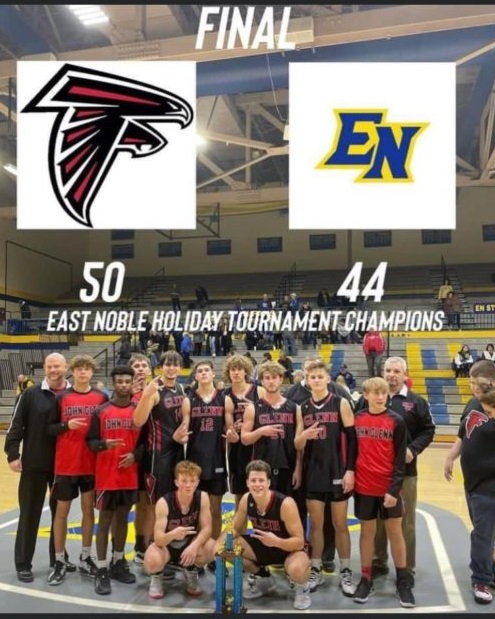 KENDALVILLE – The strong start to the year for the John Glenn Falcons continued on Tuesday as they picked up a pair of wins in the East Noble Holiday Tournament.
Round one saw Glenn lead from wire to wire in a win over the Heritage Patriots.
Silas Kaser had an explosive day on offense totaling 12 in the morning game. He tied for team-high honors with Joe Delinski who returned to the court with a couple of third-quarter threes. Brycen Hannah also had 12 for the balanced Falcons. A pair of Jack Porter threes got the team off to a great start and the defense was stifling.
In the championship, East Noble gave the Falcons all that they wanted in a close game throughout with Glenn taking a 50-44 win.
The Knights hit 5 threes in the first half but were held to just 6 points in the final frame by the Falcon defense.
Offensively, Silas Kaser had his best game of the year scoring 24 points from inside and outside. Brycen Hannah went 8 for 11 from the line to total 18 while Delinski added 6, and Jack Porter 2.