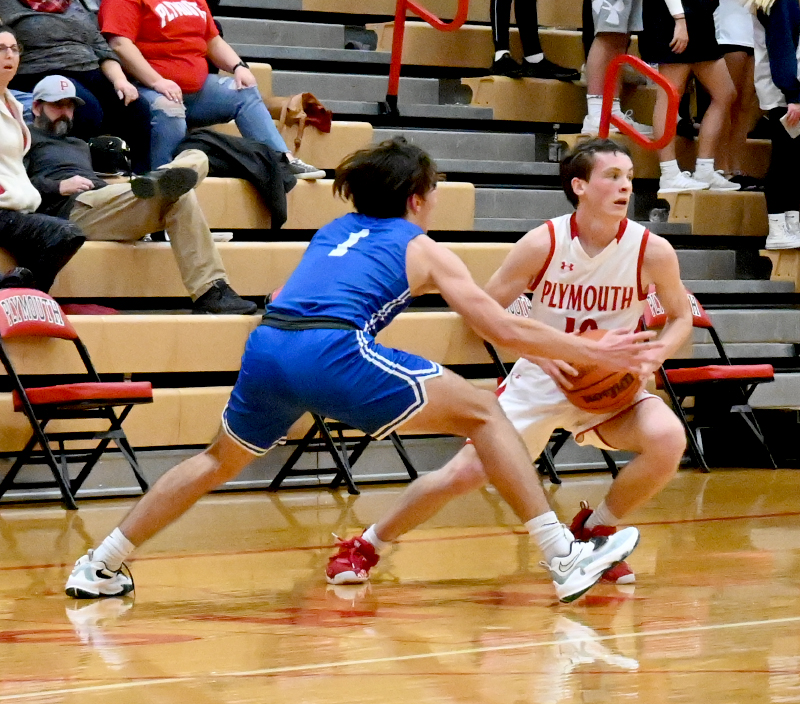 PLYMOUTH – The number one team in Class 3A did nothing to diminish that reputation as Mishawaka Marian commanded from start to finish in a 59-22 win over Plymouth.

“They are really good,” said Plymouth coach Joel Grindle of the Knights. “If they cut down the nets in March it won’t surprise me. I’ve seen a lot of good basketball teams and they are up there.”

“You have to compete though,” said Grindle. “You have to have some dog in you and we had a few kids that did. Trey Hall got some minutes that he hadn’t been getting and I would say he earned himself some more. He worked his tail off tonight.”

Marian jumped out instantly and never looked back ending the first quarter with a 20-2 lead, the only basket Ellery’s drive late in the quarter.

The duo also ended the night as the Pilgrims leading scorers, Ellery with eight and Hall with four.

Marian shut down Plymouth’s two main scoring threats this season with Davis Wray hitting just one basket for two and Easton Strain the same. Both came in the second quarter.

The problem again was the inability to hit close-range shots.

“That’s been the story of our season,” said Grindle. “We passed the ball better tonight than we did on Tuesday, which is saying a lot against a team with that length and that athleticism. Then all of a sudden you get too careless. It’s stuff we have to get better at.”

“We have to learn how to score,” he said. “We are trying to get the ball to our guys who we think we can, 22 points isn’t going to beat too many people.”

“Our kids are capable of doing it. Our kids have to step up and have some toughness and decide that they are going to score.”

Marian was in firm command from the start with a stifling defense that held the Pilgrims to just 11 points through three quarters.

The Knights spread the wealth with both Deaglan Sullivan and Jackson Price hitting for 14 points. Price also had six rebounds to lead in that category.

“Our goal for the next week is that we have to find five dogs,” said Grindle. “We have to find five guys that are going to fight. We need 11 dogs and there’s no reason we don’t have 11. We need a full-fledged effort and the belief that we can compete with anybody.”

“We need five guys that want to go out there and compete and that’s where we are going. We’re going forward and we’ll see what we’ve got.”

Plymouth is now 0-5 on the year and face the top ten ranked NorthWood on the road next week in their NLC opener.