Dragons hold off Plymouth for win 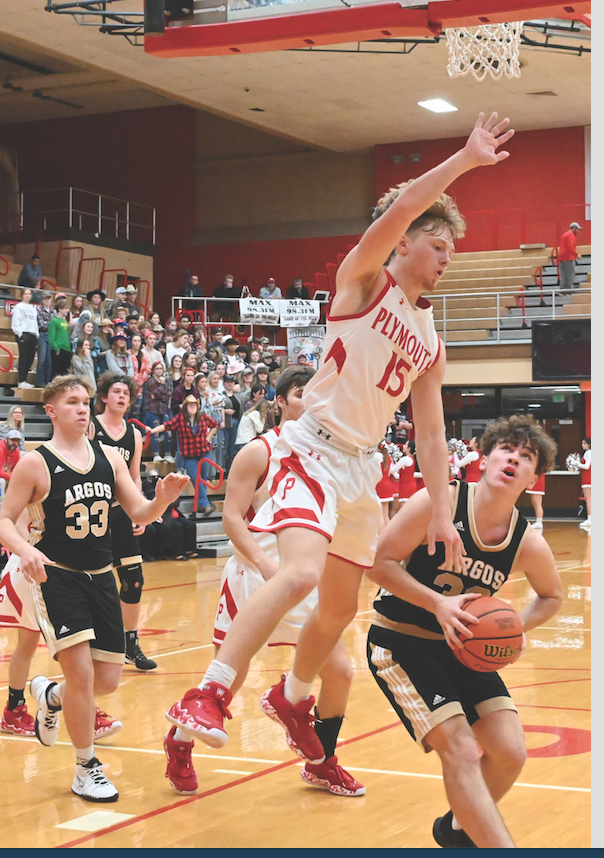 PLYMOUTH – What a difference 48 hours can make as Plymouth’s Pilgrims opened the home portion of their season with a close loss to Argos 52-50.

The Pilgrims were a different team from earlier in the week giving the talented Dragons a run for their money in a game that went down to the final 10 seconds.

“Every single kid out there for both teams left it all out there,” said Plymouth head coach Joel Grindle. “Argos has a really good team and it was a heckuva game. The crowd was amazing for both teams.”

Argos had more to cheer for in the end as they overcame a valiant Plymouth effort, drastically improved from Tuesday night’s loss at Triton.

It was a split offensive night for two of the Dragons star players with Michael Richard carrying the load in the first half with 14 of his 18 points on the night and then handed the baton to J.J. Morris who hit for 17 of his team-high 23 in the second half.

“We were looking to work him low and take the matchup as it came,” said Argos boss Jason Breden. “With his size, he’s a very versatile player and has really started to understand the offense the way we want to run it. I hope tonight is the first of many nights like this for him.”

For Plymouth, it was the emergence of Davis Wray that was a big story. Wray had 27 on the night slashing to the basket in the second half leading a comeback for his team.

“He did things that we need Davis Wray to do,” said Grindle. “If Davis Wray plays like that we have a chance to win. We need that from him every night, every game.”

There was also a sense of urgency and understanding on both sides of the floor for Plymouth.

“It looked like what a Plymouth basketball team is supposed to look like, cutting and moving, talking on defense, we were far from perfect,” said Grindle. “We did things in spurts. In a close game like this you can analyze every single possession. If our kids come out and play like that, with that effort and intensity good things are going to come to our kids.”

“Frankly right now we have to make a winning play and our kids have to believe they can do that,” he said. “If we play like we did tonight we have a chance in a lot of games.”

Both teams had a missing piece from the game that likely would have made a difference for both. Plymouth’s Easton Strain reinjured his ankle literally out of the locker room at the half and Breden’s veteran squad would like to have one more veteran back on the floor as well.

“This is a senior-led team and I love all of them,” said Breden. “You saw four of our seniors were on the floor tonight but there’s a guy on the bench who is equally important in Kayden Brady. He’s getting back healthy and we’ll need him back out there as we go on.”

Argos is now 2-1 on the season and will take on LaVille Tuesday. Plymouth is 0-3 and will have Winamac at home on Tuesday.

New face in the trainer's room for LaVille