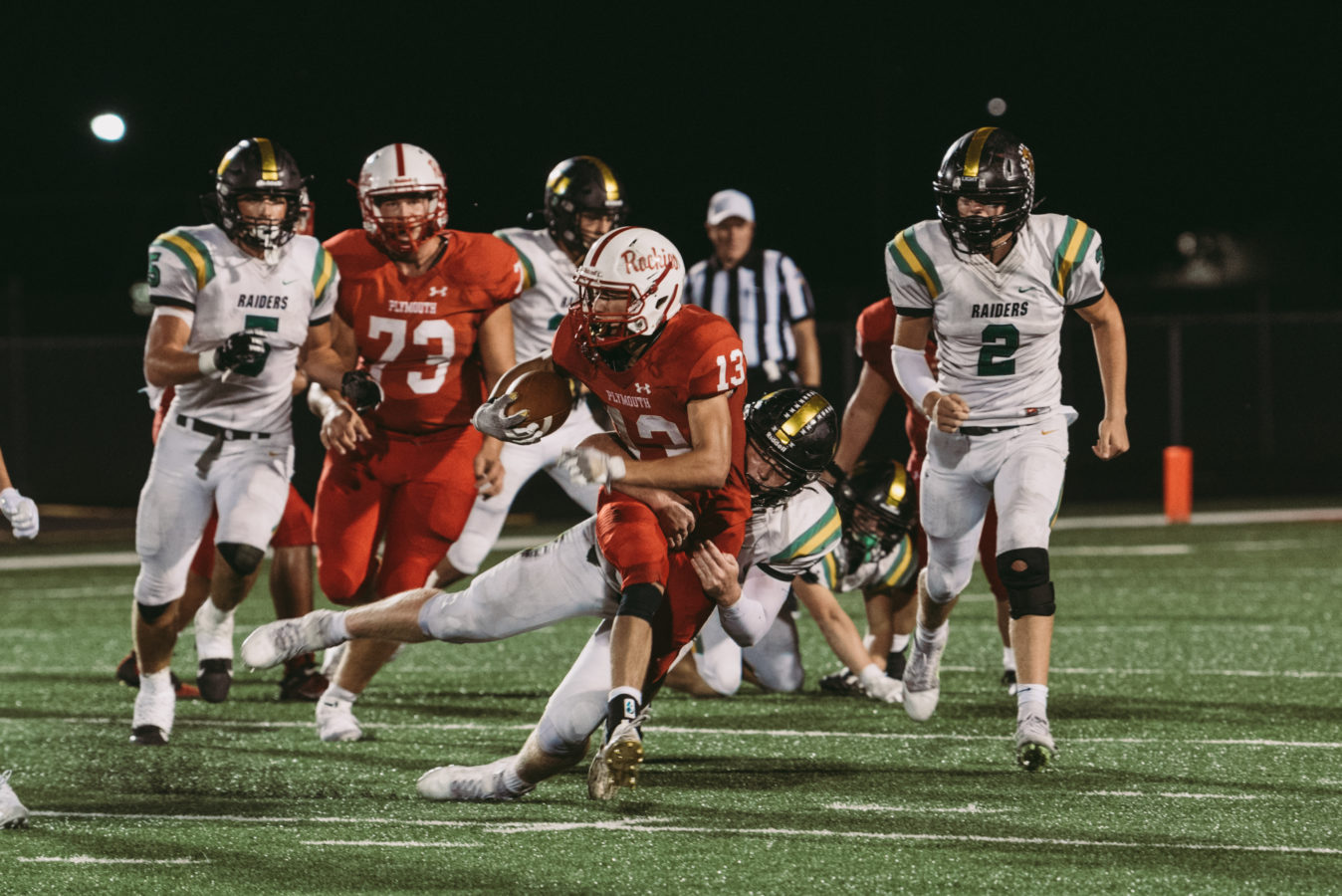 PLYMOUTH – While football coaches are not usually the type to be happy with a moral victory, Plymouth coach John Barron at least had the chance to see his defense look a lot better in spite of a 35-0 loss.
Among the scores in that 35 total, there was a pick-six, two punt muffs, and more than one fumble resulting in a short field. Even the one Raider score in the second half was after a costly fumble.
What wasn’t pleasant was the number fourth and longs, which turned into big plays for Northridge.
“We had a lot of kids play hard and we had kids play smart on every play but about eight of them,” said Barron. “We seem to have no football sense on setting the edge and it’s frustrating when it’s fourth and a mile or we have them in the endzone on a punt and we let them live.”
“Our kids played hard on defense. I can’t fault them,” he said. “We had nothing going on offense and we had to play defense all night long. Other than one drive we were out there most of the game.”
The Rockie defense found a lot of life in being aggressive. Stunting most of the night, Plymouth kept Northridge off-balance much of the night sending the house on almost every play.
“We were being aggressive defensively and the kids were enjoying it,” said Barron. “We were pretty sound. We got them in a lot of negative plays and a lot of long down situations and then we let them live. We can’t do that and expect to win.”
One player surely having fun was defensively lineman Joey Garcia. Given a chance to back off the line of scrimmage and take away the double team’s he’s faced most of the year, Garcia spent the night in the backfield making life difficult for the Raider offense.
The Plymouth offense was another story as they struggled to find any positive plays, and other than one extended second half drive could do little to help the revitalized defense.
“I think we took a step backward offensively,” said Barron. “Without seeing the film I don’t know exactly what all the breakdowns were. I thought we had a chance but we just gave up some silly plays in the first half.”
“If we could have gotten anything in there it would have been a two-score game and we had the ball to start the second half but we couldn’t get anything going,” he said. “I thought (quarterback) Lennon (Creighbaum) was uncomfortable. I think they made him uncomfortable all night. They were making his reads really quick. We tried to base block and run some simple things. We had a couple of miscues, which gave us long downs and those are always tough to call.”
Maybe most of all the Raiders were able to set the edge and keep both Creighbaum and Plymouth’s biggest weapon Devante Garcia from getting to the outside.
“Our biggest challenge on offense right now is how do we get the ball to Devante more,” said Barron. “That is our challenge right now.”