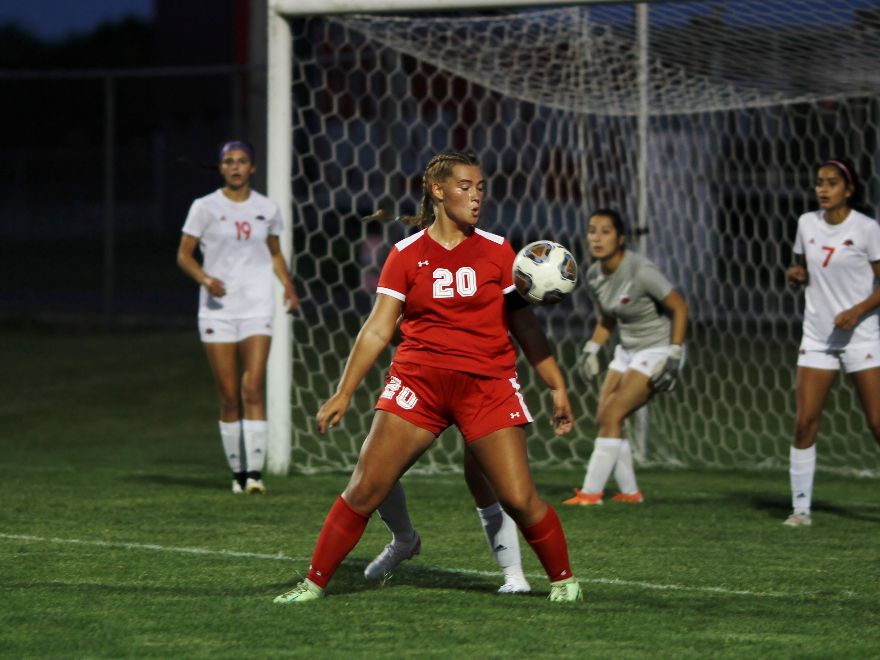 PLYMOUTH – It was a typical Northern Lakes Conference soccer battle on senior night at Plymouth as Goshen’s girls were able to push across one more goal and take a win over the Rockies 2-1.
The night started as a typical NLC slug fest with both teams looking for some kind of opening. Plymouth was able to find that opening early when Thylane La Fur got open for a shot and put the Rockies ahead 1-0 seven minutes in.
“It was a pretty open game,” said Plymouth coach Josh Martin. “We had that one goal lead and I changed to a 4-5-1 to try to clutter up the middle a little bit, but (Allesandra Lozano Gomez) got away from us for a moment and got a ball in the box. We didn’t want to give up a cheap goal late in the half but that’s what happened.”
The turning point in the game may have been at around the 10 minute mark when Aubrey Vervynckt appeared to get free for a goal but it was taken off the board for a foul.
“In the beginning, we had that two-goal swing where we had one taken back and they got one two minutes later,” said Martin. “That was tough. That’s tough on a team. It could have been 2-0 there and it ends up 1-1. That was a pretty big momentum shift.”
The deciding point in the game was early in the second half when Goshen game out of the halftime break and turned up the pressure, finally resulting in what would be the winning goal.
“They played the ball pretty quick, we knew we needed to get good pressure on them,” said Martin. “They played a triangle midfield and we just didn’t get enough pressure on them. We let (Gomez) free a couple of times and she got balls up to their forwards and they were good finishers.”
As time was winding down Plymouth had opportunities but was unable to capitalize.
“We had our chances to tie and win that game,” said Martin. “We had two breakaways and their keeper (Abril Diaz) made some pretty good saves. You hope that our forwards can finish that off but that’s the way it goes sometimes.”
For most of the game, the Red Hawks succeeded in keeping the ball away from Plymouth’s threats up front.
“We are looking to get the ball to Aubrey (Vervynckt), Amber (Schrameyer) and (Lauren) Rumpler and most of the balls we played were a little too deep and the defender had the advantage,” said Martin. “Some of our choices getting the ball to our weapons, we gave them tough balls to try to get to.”
Plymouth falls to 2-3-1 on the year. Goshen is now 6-3.
*GOSHEN 2, PLYMOUTH 1
at Kindt Soccerplex
Scoring:
First Half
P – 33:15 Thaylane La Fur.
G – 9:31 Mirian Ruiz Sanchez
Second Half
G – 35:31 Natalie May