Plymouth has lost one of a kind 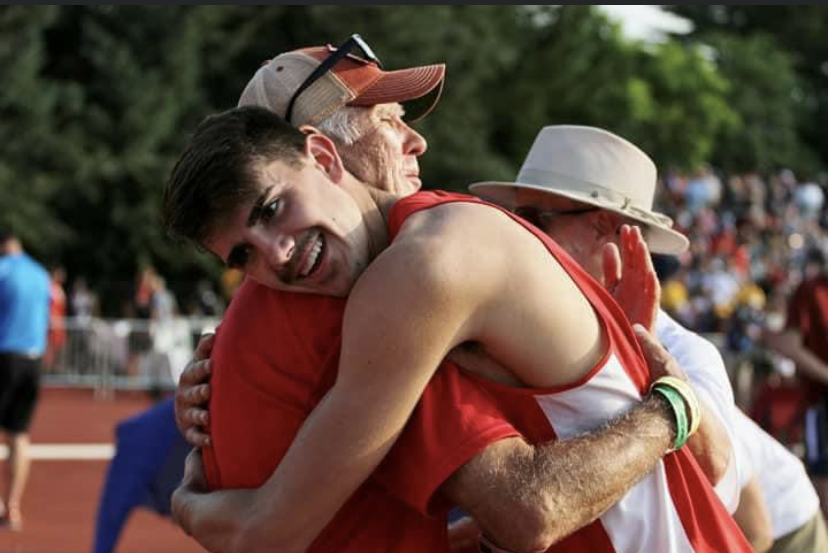 By Rusty Nixon
PLYMOUTH – I met Russ Teall when I was a freshman in high school. His passing Thursday diminishes all of us who knew him.
I guess it wasn’t “met” then in the traditional sense of making someone’s social acquaintance. That was the point when he became my basketball coach. I’ve always told him, and anybody else when it comes up, he was the best basketball coach I ever had.
Maybe it was just the fact that he was the perfect guy in the perfect spot to make an impact on me.
He was at the very beginning of his career then and he was excitable. And for his team he was exciting. And while I was a little too old to be playing for him at the end of his career I don’t think I’m out of line in saying his teams felt that way about him until he decided to retire.
It’s the exact reason he was able to have an impact on a little Rusty Nixon in 1976 and a world-class athlete like Nate Patterson in 2018.
In many ways, he reminded me a lot of my father. Passionate, demanding, not easy to please, but easy to get along with.
Coach Teall was also the track coach and the horror stories came down from previous basketball teams he’d coached, “It’s basketball. He thinks it’s the track team,” and “Don’t think you’re picking up a basketball until Christmas time,”.
The stories were all true.
We started basketball practice in November then. I swear we didn’t pick up a basketball until after Christmas. Well, that might be a little bit of an exaggeration but we knew everything there was to know about running stairs, lines, hallways, gym floors, anywhere where running was possible.
Let me put this in perspective for you.
That year we were in a game at South Bend Riley, and I won’t candy-coat it, we were having our ass handed to us at halftime. Coach Teall came in the locker room with a huge grin on his face like we were winning. He told us why. I have never forgotten what he told us at halftime and I have repeated it exactly to nearly every team I’ve ever coached since.
“This game is going to come down to free throws at the end. When that time comes look on both sides of the lane. They are going to be bent over sucking all the air they can grab. They are going to look across at you standing straight up like you could do this forever. Do you have any idea what kind of advantage that is? Go ahead and laugh at them.”
As a coach’s kid, I always knew it was true that there was always a method in what seemed madness. This was my first real proof.
We won the game. In double overtime.
I seem to remember Coach Teall watched it from the locker room door for – a misunderstanding with the officials. But I point back to the statement about excitable and exciting.
Years after my playing days I joined my father’s coaching staff in baseball. I got to know both Coach Teall’s sons – who frankly are definitely “chips off the old block.”
Brian was a track star at PHS and I had the joy of coaching his youngest son Eric in baseball.
I started coaching Eric around the exact same time his father coached me. While I didn’t keep playing basketball at Plymouth I was able to be one of Eric’s coaches until he graduated.
I don’t think I’ve ever said this before but now that I think about it, I really think I wanted to have the influence on him that his father had on me. In any case, I think Eric turned out OK in spite of me.
The thing is, there were times that I know Coach Teall didn’t agree with me about how I was handling his son. But the ultimate compliment to me was that he always supported me and backed my decisions. I’m not sure that anybody can understand, first, how hard that is for a parent, and second how very much that means to your son’s coach, especially when it is a fellow coach who is doing it.
Being on the same athletic department coaching staff with Coach Teall, he never stopped being exciting and excitable.
The thing about him that struck me when we were coaching “together” was exactly the thing that made him successful.
If you knew Russ Teall, you knew Russ Teall.
There was no facade. He was exactly who you saw. You knew who he was, you knew how he felt, the moment you met him.
There wasn’t a Russ Teall for his players, or his peers, or his friends, or those who just met in passing. There was only Russ Teall.
That is rare in today’s time.
Which makes it more sad, that it is even more rare now.