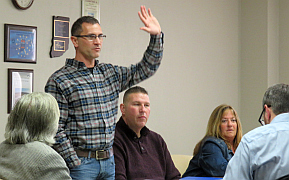 By a 5 to 1 voter the Shady Rest Advisory Committee voted to send a favorable recommendation to the Marshall County Commissioners for David’s Courage to operating a sober living operation in the facility.  The recommendation also include that if the program is not approved by the commissioners the committee directs them to divest themselves of the building.

On Thursday the Shady Rest Advisory Committee meet in the Commissioner’s meeting room of the County Building in front of more than 60 residents and concerned citizens.  Commissioner Kurt Garner asked those who spoke at the public hearing in January to refrain from speaking and limited the new speakers to 2 minutes.

The committee accepted a second petition with an additional 42 names opposed to have the addiction recovery program in their neighborhood and 7 letters of support from women who are currently housed in the Marshall County Jail.

Gregg Erickson and Ted Hayden spent several minutes attempting to clarify comments and answering questions that had been submitted to the committee.  Erickson said they have a business plan in place and selected a board of directors who will oversee the operations of David’s Courage.  The program will operate as its own entity and have the final determination on admissions to the program.

Security was a big issue during the public meeting and Ted Hayden said all doors and windows will be locked and alarmed.  There will be a minimum of two staff members on duty at all times with more working during the daytime hours.  They will conduct hourly room checks and perimeters checks every two hours.

Hayden said the men and women who are living in the substance abuse facility agree to be in the program.  During their first 30 days participants will have no contact with the outside world and will be in intense therapy.  Only authorized visitors will be allowed, and drug screens will be required.

Opening up the meeting to the public 18 people spoke.  Many spoke in favor of the program and some spoke of their concerns having such a facility so close to a residential neighborhood.  Two of the final speakers were from a sober residential facility in Warsaw.  They said the neighbors were very apprehensive at the beginning but not are appreciative to the work the men do in the neighborhood: raking leaves, mowing grass, shoveling snow and carrying in groceries.  They said the neighbors are not afraid of them and even bring them goodies.  They both said the program is giving them a second chance. 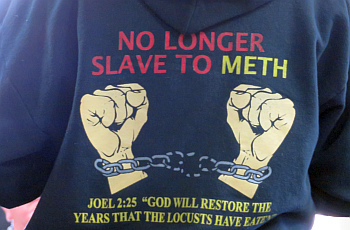 Committee member Bill Walters made the motion to send a favorable recommendation for David’s Courage which was seconded by Dustin Schafer.  Committee member Judy Stone asked for an amendment to have the commissioner divest themselves of the facility if they don’t approve the David’s Courage.  Both Walters and Schafer agreed with the amendment and they vote was 5 to 1.  The sole no vote was from Deb VanDeMark who stated she was in favor of the program but was not in favor of leasing the facility she would rather sell the property.

The decision on rather the property would be sold, leased or deeded will be up to the commissioners and not a recommendation from the Shady Rest Advisory Committee.

Commissioner Kurt Garner told the group this was emotional for him.  He said he could see the passion on both sides.  With his voice cracking he said, “I feel this is a chance we can give some people.”