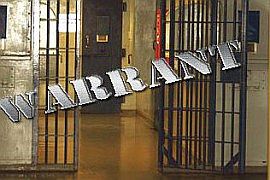 About 3:15 he was dispatched to the Marshall County Probation Department in reference to a female in their lobby with a possible warrant out of St. Joseph County.

Arriving on scene Officer Enyart confirmed the warrant and 24 year old Amanda O’Donnell of Walkerton was then taken into custody, transported to the Marshall County Jail and held to await transport to St. Joseph County.

Locating the residence where Donald Mills was staying, Officer Enyart went to 1031 West Adams Street and found Mr. Mills.  He was taken into custody and transported to the Marshall County Jail where he was lodged to await extradition to Starke County.