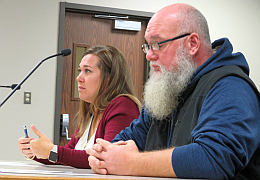 Marshall County Fair Board Secretary Angel Balsley and President Robert Hurford appeared before the County Council Monday seeking funding for the OCRA grant to build a Multi-Purpose building on the fairgrounds in Argos.

Hurford said the grant is very competitive and during the last round 16 entities applied and only 8 were funded with Marshall County’s request being one that did not receive approval.  Feedback from the committee reviewing the grant applications showed a lack of financial support from the county for the $800,000 facility.

Balsley said the grant is valued at $500,000 and with donations and fundraising they are still $215,000 short.  In the initial application a bank loan was going to be secured to cover those costs.

The suggestion by the grant writer was to have the county use their annual donation making it appear more supportive of the project.

Marshall County has consistently paid the 4H Fair $24,000 annually and it was suggested the county pledge the $215,000 needed to fund the project.  The 4H would have the county discontinue the annual donation of $24,000 for the next 9 years.  Balsley said this would save them $71,000 in interest.   While the pledge for the funding from the county is needed before the February application deadline, the actual funds would not be required until 2019.

The County Council motioned to approve the pledge of $215,000 if the OCRA grant is awarded for the multi-purpose building project at the Argos Fairgrounds and the required legal paperwork is in order.  If the grant goes forward the county’s annual donation will end for at least 9 years.