Rocking In The New Year at Miller’s 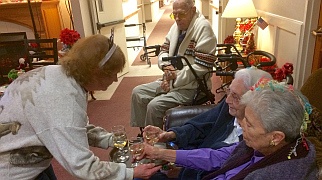 It has become tradition at Miller’s Assisted Living to ring in the New Year with a prime rib luncheon followed by a Rock – n – Roll concert with entertainer Quentin Flagg.  The Miller’s tradition is to celebrate the coming of the New Year early in the day, thus giving residents a chance to celebrate later in the evening with family and friends, or as some choose to watch the Times Square ball drop in the privacy of their own apartment.

Miller’s volunteers passed out party hats, noise makers and party poppers as the concert began at 1:30 in the afternoon.  Flagg kept the energy high with fun rock and roll songs from the 50’s and 60’s artists such as Bobby Darin, Dean Martin, Elvis, Ricky Nelson and many more.   Champagne and sparkling grape juice were distributed and the Activity Director, Cindy Flagg proposed a toast for the coming New Year.

Flagg led the audience in a countdown at 1:59 p.m.  Precisely at 2:00 p.m. residents and staff drank to the toast. They then pulled the strings on their poppers. Confetti and streamers were released throughout the Main Lobby as balloons dropped on the audience from the second floor while “Auld Lang Syne” played in the background.

Flagg continued his show while residents, staff and volunteers danced and sang along.