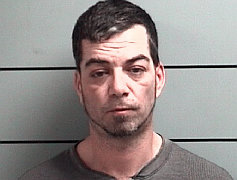 A Plymouth man was arrested Monday morning after being stopped by a Marshall County Police Officers.

Officer Wozniak and McFarland were dispatched to a residence in the 10,000 block of Iris road about 12:30 in the morning after a 911 hang-up.

Officers made contact with the homeowner and during their investigation it was discovered that 38 year old Steve Leo White was at the residence and had an active warrant.  Police found that Mr. White was in possession of marijuana and paraphernalia while taking him into custody.