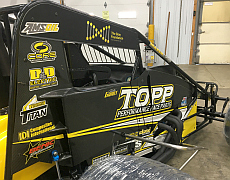 TOPP Performance Race Parts and TOPP Motorsports Thursday announced a new 2018 partnership with The Bow Foundation. The charity is focused on supporting medical research and increasing awareness for patients with GNAO1, a rare genetic disorder with no common name.

TOPP will donate a portion of their winnings to the Bow Foundation, in addition to partnering with the foundation for fundraising events throughout the season.

Roughly 50 children worldwide are impacted by a GNAO1 disorder, including the granddaughter of TOPP Motorsports President and CEO, Kevin Birchmeier. Children with the disease suffer from severe developmental delays, seizures, and movement disorders.

“It’s difficult when someone you love is diagnosed with a genetic disorder. That’s especially true when it’s a rare disease like GNAO1,” Birchmeier said. “The entire TOPP Motorsports team rallied around this partnership and the unique opportunity to give back while we race. I’m excited to partner with the Bow Foundation, and I look forward to seeing their logo in victory lane throughout the season.”

“We’re overwhelmed by the support of TOPP Motorsports and look forward to cheering them on this season,” Bow Foundation co-chairs Emily Bell and Alice Fox said. “Partnerships like this are critical as we work to fund cutting-edge medical research, increase GNAO1 awareness, and change lives.”

TOPP Motorsports, based out of Rochester, Indiana, was established in 2015. The organization is owned and operated by TOPP Performance Race Parts President and CEO, Kevin Birchmeier, who has always had a passion for racing. The team was recently awarded third place in owner points in its first season for the USAC AMSOIL National Sprint Car division for 2017.

The Bow Foundation is dedicated to supporting GNAO1 families through enhanced research and increased awareness. The foundation was launched in June of 2017 by two families who have children with a GNAO1 disorder. Visit www.BowFoundation.org to learn more or donate.