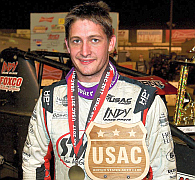 TOPP Motorsports is proud to announce that seasoned sprint car driver Justin Grant has joined the team. Coming off of a top three finish in both driver and owner points independently for USAC National Sprints in 2017, the duo has partnered for the upcoming season to make a run at the USAC National Sprint title.

“We’re excited that this partnership has come together,” said Kevin Birchmeier, owner and President of TOPP Motorsports. “Justin is such a talented driver. With him behind the wheel of our top notch equipment, we know we have a winning combination to keep headed toward our goal of winning the USAC Sprint Championship.”

“I’m so grateful for the opportunity to drive for TOPP Motorsports,” expressed Justin Grant. “I’m really looking forward to wearing the TOPP name and working with such a talented team. I missed out on the Championship title by one place this past season and I’m confident that together with TOPP, we can get to that top spot.” 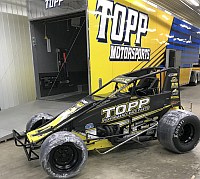 Grant is coming off of a stellar season, finishing second in USAC National Sprint points by a mere six points and receiving various honors for his versatility and performance. He was recently announced as the winner of the Prosource Fast Time Award Challenge for earning fast qualifier eight different times in 2017. Additionally, Grant was the only driver in 2017 to start all USAC National point races – Silver Crown, Midgets and Sprints – and was one of only two drivers across all divisions to win feature events in each division. It was recently announced that Grant’s consistency in performance across the three National USAC divisions has earned him the coveted Mike Curb “Super License” and a $5,000 award.

Grant’s versatility is something that the team looks forward to, as it grows.

“We love that Justin is so versatile,” stated Birchmeier. “Having a driver that has the experience and track record of winning that Justin does opens a lot of doors for us. I can’t tell you enough how thrilled we are to have him as part of our TOPP family.”

TOPP Motorsports, based out of Rochester, Indiana, was established in 2015. The organization is owned and operated by TOPP Performance Race Parts President and CEO, Kevin Birchmeier, who has always had a passion for racing. The team was recently awarded third place in owner points in its first season for the USAC AMSOIL National Sprint Car division for 2017.