Turf Project for Football Field at PHS Scheduled for this Summer 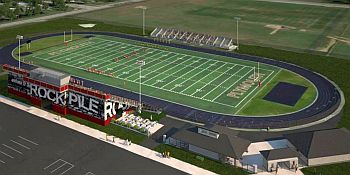 Two summer projects slated for Plymouth High School could be completed by July 20 if the weather is cooperative. An artificial field turf for the football field will be a welcome sight for athletic and band use students. The turf is being installed by the Motz Group of Cincinnati, Ohio at a cost of $797,600.

The school board approved signing the needed paperwork during their April 10 meeting. Funding for the project will come from the corporation’s Capital Projects Fund over a 5-year payment schedule.

The field has been used for athletic events primarily for PHS students; however, as the football field is eliminated at Lincoln Junior High when a new school building is constructed, junior high practices and events will be held on the PHS field.

PHS Band Director, Bryan Ames, is also anticipating the new surface on the field for band practices and the annual Band Festival made up of a number of schools in a competition meet. According to Ames, there is more interest from more schools this year after learning that the field will be upgraded.

The Board also accepted a low bid by Niplock Excavating, Columbia City, for asphalt improvements for the school’s north parking lots. A part of the project will be taking approximately 1.5 inches off the current asphalt surface, according to Dave Schoof, Facilities Director.