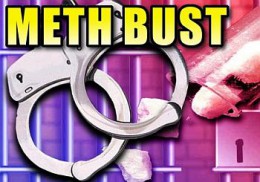 Wednesday night about 10:30 Plymouth Police were dispatched to the Red Rock Inn on North Michigan Street for a strong chemical odor coming from room 229.

Officer Jeremy Enyart arrived on the scene and smelled the chemical odor.  During his investigation it became apparent when a female opened the door the chemical smell was coming from that room.

Several precursors and a set of scales for manufacturing methamphetamine were located along with an active one-pot lab, HGL generator, methamphetamine and other meth related items.

32 year old David L. Campbell of Bunker Hill and 37 year old Amy Bacewic of Knox were arrested for Dealing Methamphetamine with prior convictions.  They were held without bond.