After 15 years of flagging on the road, Denny Long is staying home to be atop the flag stand at the Playground of Power.

Long, of Plymouth, started as a flag man at South Bend and has been involved in different series of racing in the state and in the Midwest.  He’s been east of the Mississippi and even to Daytona to flag a race.

It’s a family affair as his children are into the sport as well as many other family members who have influenced his decision to be a fixture in racing.  His daughter helps score in the Go Kart Series and his son tunes Go Karts and even helps spot for a driver in the Indy Car series. 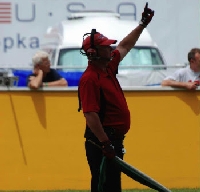 “I did leave the sport for a while and served on the City of Plymouth Police Department,” he mentioned.  “I retired in 1999 and have been on the road for 26 weekends a year.  I’m glad to finally be home and it’s fun to be at a dirt track.”

This will be Denny Long’s first season at Plymouth Speedway.  The season begins this Saturday, April 23.  Gates open at 4 p.m. with hot laps at 6 p.m. and racing at 7 p.m. ET.  For more information, visit www.plymouthspeedway.net.
By:  Anita Goodan