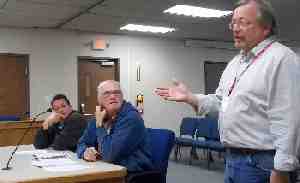 LaPaz mobile home park owners Ralph Costello of Gatewood Estates and David Gee from Creekside Manor appeared before the Marshall County Commissioners on Monday asking for an exemption from the County Zoning Ordinance for the Improvement Location Permit fee.

Costello recently received a letter from County Planning Director Ralph Booker and Building Inspector Chuck DeWitt notifying them of the county ordinance requiring them to obtain a permit every time the move-in or relocate a trailer in their respective parks.  The pair admitted that the county has overlooked the ordinance for several years but believe for the safety of citizens they need to inspect the homes to be sure there are properly connected to utilities and that tie-downs are securely in place.

Costello contends that since they are permitted by the state and the inspected by the State Board of Health annually they shouldn’t be required to follow the county ordinance which primarily pertains to private mobile homes which site in individual building sites.

The fee for the Improvement Location Permit is $150.   Costello said they average between the two parks 3 to 4 moves a month. He said, “The fee would cause an extreme hardship on us.”

Gee said it was an unnecessary fee and additional tax on them.

The commissioners said they would not issue an exemption at this time and suggested the men attend a County Plan Commission meeting with their concerns.