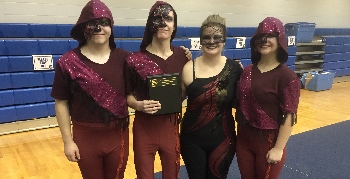 For many years, Indiana has had competitive circuits for winter color guard and winter drumline. The Indiana High School Color Guard Association hosts all winter guard competitions in the state and the Indiana Percussion Association hosts all winter drumline competitions. Plymouth High School competes in both circuits. New for this season, the percussion association is hosting a “Winds” division that allows for indoor shows similar to marching band. Plymouth is one of four high schools in Indiana that will be competing in this new division in the state. “This is a great opportunity for our students,” said PHS band director Bryan Ames. “This new division of competition allows us to merge several of our smaller competition groups into one unit and additional add woodwind and brass players (which were formerly forbidden from competition). Now, we can educate many more kids with advanced-level training in one ensemble.”

Additionally, the national circuit, Winter Guard International (WGI) will be hosting a national winds division. Plymouth High School will be one of the first schools in the country to compete in this division at the national level. The national championships will be held on April 15-17 in Dayton, Ohio.

At the recent competition at Carroll High School, Plymouth Winds came out in on top earning first place with over a six point advantage on runner-up Decatur Central (Indianapolis). Senior band member Sophia Smith stated “it was really cool to see all of our hard work pay off in such a fantastic way. This is my fifth season competing in the winter circuit and it was nice to win a competition by such a large margin. This is going to be a great season!”

The Plymouth Winds will next compete in a WGI National Regional event at Franklin Central High School in Indianapolis on Saturday, March 5th. This tournament will host schools from numerous states in the mid-west. Good luck to the Plymouth Band as they prepare for this upcoming event.

Information about the Plymouth Band and the many competing ensembles in the program can always be found at the band’s website (www.prideofplymouth.com).