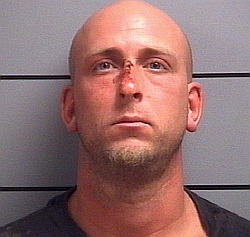 08/12/13  A routine traffic stop Thursday night quickly escalated when a passenger in the car head butted an Indiana State Police officer.  The event began shortly after 10:00 p.m. when the Bremen Post trooper stopped the driver for several traffic violations on 6A Rd. near Michigan Rd.

Trooper David Caswell had stopped the driver of the car due to her erratic driving.  As he spoke with the driver, Trooper Caswell was able to smell the odor of alcohol coming from the car interior.  The front seat passenger, Travis Lee Simpson, 33, of Plymouth, told Trooper Caswell that he had been drinking.

While questioning Simpson about the marijuana Trooper Caswell was intentionally head butted by Simpson.  Simpson then continued to yell threats as he was subdued to the ground.  A subsequent breath test showed that Simpson had a BAC of .15%.

Both Trooper Caswell and Simpson were treated at the scene by medics.

Travis Simpson was arrested on charges of felony Battery, Intimidation, and Resisting Law Enforcement.  He was also arrested for misdemeanor Public Intoxication, and Possession of Marijuana.  He is currently being held in the Marshall County Jail.