No Injuries in Monday’s Semi Crash on US 30

07/31/13 Plymouth Police and Fire responded to the railroad crossing on US 30 just west of Oak Drive Monday afternoon at 1 p.m. for a two vehicle crash. 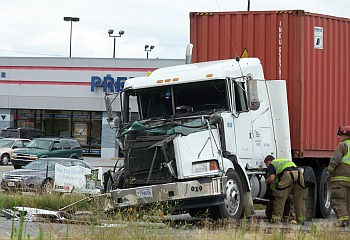 Officer John Weir investigated the crash that involved two semis.  The accident report indicates that 48 year old David Zook of Harvey, IL was traveling west bound in a 1997 Volvo semi-tractor.  The vehicle in front of him, a 2009 Freightliner driven by 58 year old Mark Schertzing of Stockbridge, MI  was hauling grain and suddenly stopped before the railroad tracks for another semi that was required to stop for the crossing. 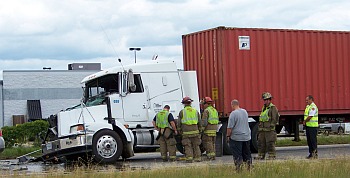 Zook was unable to avoid the collision, skidding 61 feet before impact with the grain trailer.   His semi tractor sustained major front end damage but Zook was not injured.

Schertzing’s trailer was damaged in the rear end crash but he was not injured.