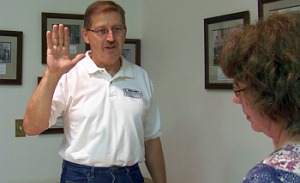 07/18/13 Last week the Plymouth Board of Aviation Commissioners expanded to a 5 member board with the mayoral appointment of Joe Mersch.  Mayor Mark Senter commented that there has been an issue recently with having a quorum and state statue does allow for a fifth member.  Mersch owns the storage building near the airport and is a member of the Mentone Flying Club.

Consulting Forester, Bruce Wakeland appeared before the board with a recommendation for the woodland areas on airport property.  In January a timber buyer approached the airport seeking to harvest 42 walnut trees on the property for $17,000.  Wakeland recommended not accepting the offer but allowing him to set a timber sale this fall.

Wakeland walked the woods with Airport Manager Dave Lattimer in late February.  There are approximately 52 acres of woodland with 25 acres on high ground.  He identified the different species in the woods noting walnut, red oak, ash, and cotton wood.

The recommendation is to sell approximately 200 trees.  Wakeland will mark the trees in the sale, prepare the bid sheet, conduct the bid opening, and manage the timber sale.  He will also invite specific timber buyers who would be interested in the trees selected for the sale.  He noted that the sale would include ash trees, cottonwood and some walnut trees.

BOAC board member Tom Flynn said, “Trees are not an airport friend.”

Kevin Morrison, BOAC board member asked if the FAA grant prohibits the airport from selling trees.  He also if the city had stipulation of harvesting the trees.

A contract for Wakeland’s services was signed by the airport manager.  Payment of 25% is due at the bid opening with the remaining 75% due when the cutting is complete or at the end of the first year.  Wakeland said it is typical to allow two seasons to harvest the timber.