Firefighters on Scene of Mulch Fire for 30 plus hours. 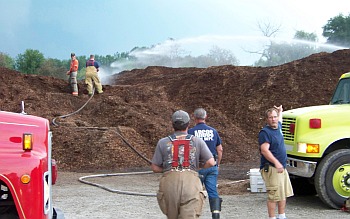 06/25/13 Fire fighters from Argos have been at the mulch fire at North Central Pallets on State Road 10 for more than 30 straight hours.

Monday evening Chief Mark Dean confirmed that a few firefighters from the Argos Department spent the night knocking down hot spots.  A couple of them had been on the job for nearly 24 hours. 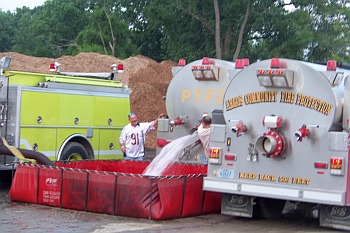 Chief Dean said when he arrived on the scene Sunday afternoon about 1:30 the whole north side of the mulch pile, which measured approximately 200 yards long, 100 yards wide and 75 feet tall was fully engulfed.  The fire was started by spontaneous combustion.  The chief said mixing wet wood from the trees cut for the US 31 project with kiln dried wood and moisture caused the wood to decay at a faster speed and thus, spontaneous combustion.

As Monday’s storm began to move in, Chief Dean had everyone pull off the scene because of the severe weather.  His hope was that they could all get home tonight.

The Argos Fire Chief wanted to express his personal thanks to the department and firefighters that responded to the call and assisted with the battle.