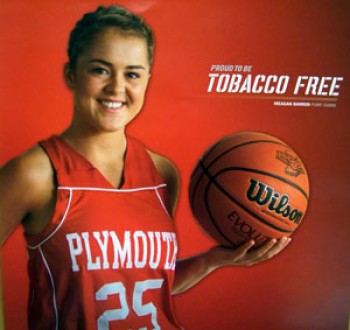 11/11/10 As another high school winter sports season begins in Marshall County, a new student-athlete is initiated into an elite group honored by the Indiana High School Athletic Association as an IHSAA Role Model. Picking up where those before her left off, one Marshall County high school student will take the lead as an anti-tobacco advocate in her school and community during the IHSAA Role Model Program’s eighth consecutive year.

Participants of the 2010-2011 Indiana High School Athletic Association (IHSAA) Role Model Program appear larger than life on posters, sports schedules, trading cards and other materials as symbols of healthy, active individuals. And while the honor to do so recognizes students who boast high grades, athletic achievement, and a good record of citizenship, carrying the torch as an anti-tobacco role model isn’t always easy, even for all-stars.

“Participants are asked to conduct themselves as role models among their teams, classmates and community members at all times, which can be a great amount of pressure,” said IHSAA Commissioner Blake Ress. “Much is asked of these student-athletes in the name of changing habits and positively influencing lives.”

Meagan Barron, a junior basketball player from Plymouth High School, has been selected to represent her school during the 2010-2011 winter sport season. Barron is sponsored by Tobacco Free Marshall County. In total, 62 students from 50 Indiana high schools are participating as IHSAA Role Model during the 2010-2011 school year.

Barron was nominated to represent her high school by administrators at her school. She also signed a pledge agreeing to be tobacco, drug and alcohol free and serve as positive role model for her community.

Educators are encouraged to display Role Model posters and distribute pocket schedules/trading cards in their high school, the middle and elementary schools that feed their high school, and in local businesses throughout the community. This year’s materials carry the headline: “Proud To Be Tobacco Free.”

“The fact of the matter is there are thousands of high school athletes in Indiana that serve as role models,” said Ress. “The leadership skills required to fill such important roles in our state’s schools and communities are just some of the many life lessons taught via high school athletics.”