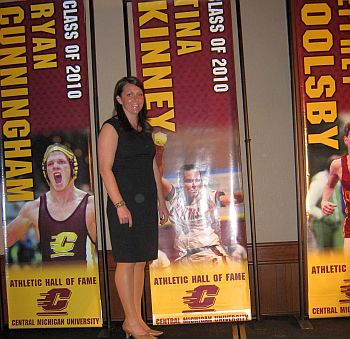 11/04/10 Tina Kinney Salley, daughter of Don and Jan Kinney of Plymouth, was inducted into Central Michigan University’s Athletic Hall of Fame during festivities October 29 and 30 at Mt. Pleasant.

The 2001 graduate was first ballot choice for induction.  Honors throughout her entire softball career include first-team All Mid-American Conference selection all four years, just the fourth in MAC history to accomplish the feat.  She was 1997 MAC Freshman of the year, 1998 MAC Player of the Year, 1999 MAC Tournament MVP, and 2000 MAC Player of the year.

In the 1999 MAC Tournament, Kinney-Salley fired a no-hitter in the opening game against Akron and went on to toss 28 scoreless innings as CMU cruised to the title.

During her career she defeated six top-15 ranked teams, including four in three NCAA Tournament  appearances (upsetting both ranked Stanford and Notre Dame in 2000), and defeating 12th ranked Michigan and Michigan State.  She was selected to the CMU Silver Anniversary Team and was a second round draft pick of the Ohio Pride of the Women’s Professional Softball League.

CMU Coach Margo Jonker is quoted as saying “Tina will go down as one of the best players in MAC history, as well as CMU history.  She was a force on the mound where most of her accolades came from, but also at the plate.”  Tina currently lives in Farmington Hills, Michigan with her husband Tom, and children Grace, Brooke, and Andrew, and she is a paralegal. 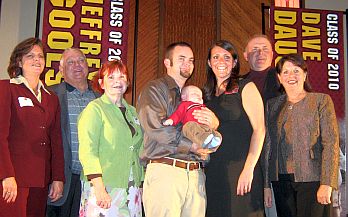