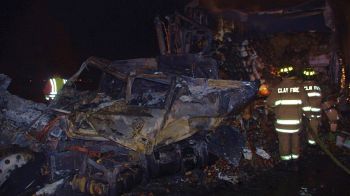 10:15 a.m. Saturday   South Bend – The Indiana State Police are still on the scene investigating an early morning crash that left at least one individual dead.  The accident happened in the east bound lanes of the Indiana Toll Road at the South Bend east exit or 77 mile marker.  Troopers and Clay fire personnel were dispatched to the scene at 5:27 a.m. after the Toll Road Post received word of the violent collision. 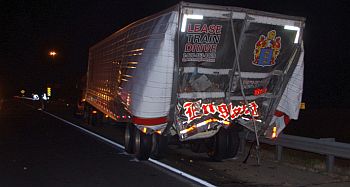 Both the east and west bound lanes of the Toll Road were closed for a time while fire personnel battled a blaze that erupted from the collision.  While the west bound lanes have reopened, the east bound lanes remain closed for an undetermined amount of time while crews sift through the debris reconstructing the accident and workers clean up the contents of the semis.  Both drivers were hauling produce which littered the highway.  East bound traffic is currently being diverted at the South Bend west exit or 72 mile marker. 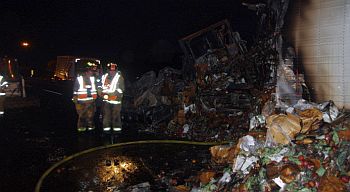 Purportedly the driver of a red 2008 Freightliner semi tractor trailer had slowed down in or near the east bound driving lane at the South Bend east exit when the rear of the trailer he was pulling was struck by another east bound semi tractor trailer.  The driver of the Freightliner semi, Jorge Infante, 48, of San Pablo, California, along with his passenger, Phillip Pascoe, 62, of Upland, California, did not sustain any injuries in the crash.  The driver that collided with the rear of Infante’s trailer was killed in the crash and has not yet been identified.  The identification of the driver and any individuals that may have been in his semi may be delayed due to the intense fire that engulfed the tractor after the collision. 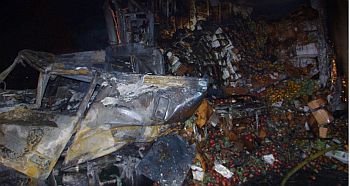 The driver that was killed early this morning in a crash on the Indiana Toll Road at the South Bend east exit was identified as Oleh Pyvovarov, 57, of Milwaukee, Wisconsin.  Pyvovarov was operating a 2006 Volvo semi tractor when he collided with another semi tractor trailer.  Pyvovarov was pronounced dead at the scene.

One east bound lane of the Toll Road at the exit remains closed at 6:00 p.m. Saturday.   The other lane is expected to open shortly.

The cause of the accident remains under investigation by the Indiana State Police.  At this time it is unknown if drugs or alcohol were a factor in the crash.