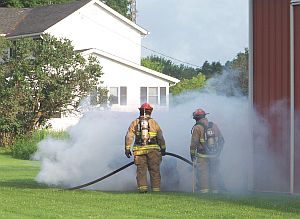 The Plymouth Fire Department responded to a pick up truck fire at 17836 12th Road Monday morning.  The 9-1-1 call came in at 8:02 Monday morning sending firefighters to the farm just that is just east of State Road 17.

The engine compartment was fully engulfed when fire crews arrived on the scene.  The quick action kept the blaze from spreading to another vehicle parked near it and the barn it was parked next to.

The property is owned by Lowell Wallace.  Damage was confined to the newer pick-up truck. 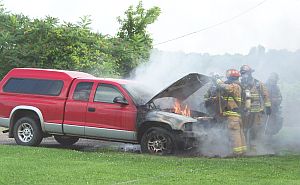 No one was injured in the battle and Fire Chief Andy Metsker said the cause of the fire had not been determined.  They are continuing to investigate the incident.