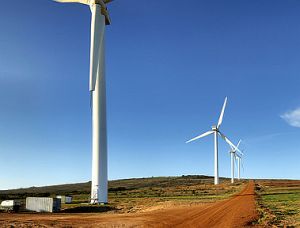 The Marshall County Commissioners had a lively discussion on the amendment to the Wind Energy Zoning Ordinance during their meeting Monday morning.

County Plan Director Ralph Booker reviewed the amendments to the current ordinance and explained that at their last meeting the Commissioners asked for changes in three categories; private airports, the measurement of the tower and the distance to the nearest residence.

There were no additional discussions on the private airports and the commissioners were in agreement to change the language from measuring the turbine from the top of the tower to the blade tip when it is at its highest point.   There was additional discussion on the setback from a residence.

Judith Stone told the Commissioners, “I feel the ordinance allows for the taking of the neighbor’s land.”  She asked for consideration of a 500 foot buffer from the property lines. 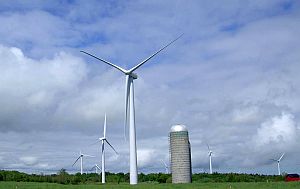 After Commissioner Chamberlin said “We have to remember ag areas are where these turbines are located.

Stone said, “This is an industrial type of use rather than agricultural.”

Currently the ordinance allows for a property line set back of 1.1 to 1.5 times the height of the structure.

Ted Weissman of Nextera Energy from Fairfield, Iowa told the Commissioners that his company has been looking at locating in Marshall County.  He then discussed issues he saw in the proposed amendments.  He said, “This is a well thought our set of ordinances.”

Weissman spoke about the 1,000 setback from a residence and said, “As a developer we naturally want to be at least 1,000 feet away to meet the 55 DBA requirements.”  He also said a property owner could seek a variance to build closer if they felt compelled to do so.

Mr. Weissman also commented on the financial assurance associated with the proposed ordinance amendments.  He said, “To us this is like an additional tax.”  He explained that his company tracks it used value and scrap value to make sure the spending makes sense and that the can meet their risks.  The financial assurances is for the decommissioning of the wind farm to which Weissman said we have contracts with land owners that include removing everything if and when the towers are decommissioned.  He also said wind turbines have a life expectancy of 25 to 30 years. After much discussion the commissioners approved the amendments to the ordinance on first reading and asked Mr. Weissman to submit his suggestions on changes.  They also invited him to give a power point presentation at their next meeting to make them and the public aware of the future of wind power.