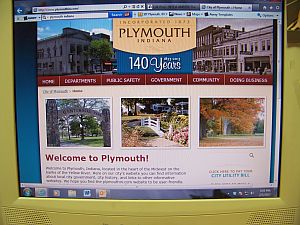 02/06/13 Tuesday afternoon Mayor Mark Senter announced the launch of the city’s new website.  Improvements to the city’s website were one of the Mayor’s platforms for re-election and he had budgeted $8,000 for the project.

The new and improved website that was launched on February 1st.  Working with DC Tech of Plymouth and Apheus Solutions of Argos, the website is a big improvement from what the city has had for the last ten years or so.  Some of the changes visitors will see include the :

One change that is very important to city leaders is that each city department head will now have control over their respective page.  They can make changes as needed on their page.

The website address is the same as the old one:  www.plymouthin.com.