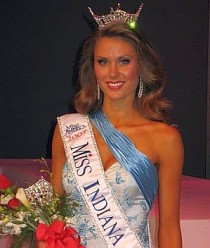 09/06/11 Due to be released on September 9, the cast of the 2011version of  the movie Warrior includes former Plymouth resident Nicole Rash. Rash plays the part of a ring girl in the action drama film about mixed martial arts featuring upcoming actors Tom Hardy and Joel Edgerton along with veteran actor Nick Nolte.

Rash, who was living in Los Angeles at the time of the filming in 2009, said she had actually auditioned for a smaller movie, but was contacted by the producers of Warrior  after they saw her audition tape and asked her to consider being  part of the  Warrior cast. Rash said, “I only had a one-day notice to get packed and fly toPittsburgh where my part was filmed.” The filming took four weeks in April and then, due to an injury of one of the fighters that delayed the filming, had to return for two weeks in July to finish.

Rash’s mother, Cindy, is hoping to have a number of people from thePlymoutharea join them for the opening at Showplace Chippewa Theater inSouth Bendfor the opening. Cindy Rash said she is making a run to the theatre on Tuesday night to purchase advanced tickets and will gladly pick up tickets for anyone who interested. Rash can be contacted at cindy.rash@yahoo.com.

The plot of the movie revolves around a former boxer whose alcoholism broke the family apart. His youngest son returns from the Marine Corps and is then trained by his father to compete in a mixed martial arts tournament. The twist comes when the younger son is pitted against his older brother, a high school physics teacher and former mixed martial arts competitor.

Nicole Rash said she would enjoy being in more movies, but for now is focused on completing her senior year atBallStateUniversity. With Spanish is her major, Rash believes being bi-lingual will help her as she launches her own company specializing in public speaking coaching. Rash said, “This will give me two different target markets.”

She believes her experience in interviewing could prove valuable to those wanting to perfect their interview skills in sports or pageant related areas.

Her own experiences included winning the Miss Indiana Pageant in 2007 and going to place as the first-runner-up in the Miss America Pageant in January of 2008.

The twenty-six-year-old has actually been combining all of her interests for many years. Before enrolling in college after high school graduation, she spent a year as an exchange student inBolivia. After beginning her studies atBallState, she given an opportunity thorough the college to live inSantiago, Chili for a year. She said, “I was able to perfect my Spanish language skills and learn abut the culture.”

Although she took a career detour to work in film and fashion worlds for a few years, she is now back atBallStateand will graduate in May of 2012. She said, “I have a full load this semester and then only have two classes to take to finish.  I will be able to take on assignments in other areas as they come my way.”

Rash said her love of fashion and fashion merchandizing is a passion, but for now is more of a hobby.  She said, “I would love to continue with helping others in dress designing, wardrobe styling, and make-up application.”

Rash credits her family for encouraging her by teaching her good values and being ambitious. She said, “My parents taught me to be confident, but also to stay humble.”

She said, “They invited exchange students into our home through ASS that literally brought the world into my house.” She added, “Living inLos Angelestaught me to appreciate where I come from and appreciate the mid-west are for sure.”

She also praised the Plymouth Schools where she said she not only got an excellent education, but was offered broadcasting and theater classes where she could practice being on camera and on the stage.

Rash said, “For now, I’m focused on my career. We will just have to see what the future holds.”