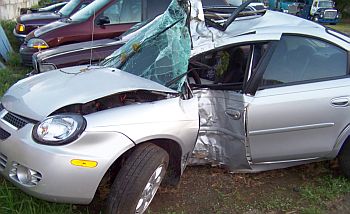 17 year old Joseph R. Slisz of Walkerton was traveling west on 1st Road in a 2003 Dodge Neon just before midnight.  Slisz lost control of the vehicle.  His car left the road on the north side and struck a tree on the property of 16578 1st Road.

Slisz told Officer Rans that he had been cut off by another vehicle prior to the crash that caused him to lose control of his car.

The driver was transported to Memorial Hospital in South Bend for treatment of his non-life threatening injuries.  His injuries were to the left leg.

Marshall County Police were assisted at the scene by Walkerton Police and EMS and Polk Township Fire.  Lyon’s Wrecker Service had the job of unwrapping the car from the tree.