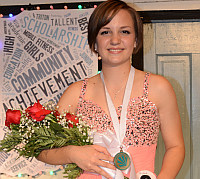 Miller is the daughter of Ken and Nancy Miller, Bourbon. She plans to attend Purdue University and study biomedical engineering. Her activities include National Honor Society, Senior Leadership Team, youth group, worship team and participating in school musicals and plays.

As the winner, she received a $1,000 scholarship, plaque and roses and several gift certificates. She also received the $200 Scholastic Achievement and $200 Talent awards.

During the evening’s competition, Miller’s talent presentation included the playing of “Fur Elise” in a piano solo. The self-expression portion required each contestant to respond to the question “What famous person from Indiana do you admire and why.” Miller’s choice was Wilbur Wright, noting his use of scientific methods and continual trying of those methods led to the airplane. 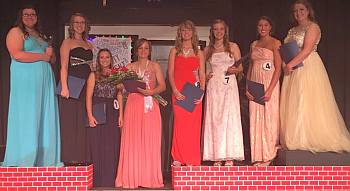 Brianna Nicole Nolan, daughter of Chad and Tiffany Nolin, Warsaw, and Amy and Angel Spencerman, Bourbon, was third runner-up and recipient of a $300 scholarship

Other winners of the preliminary awards were:

Brent Motz was the winner of the Triton Junior Mister competition and recipient of a $100 scholarship. Three contests narrowed the field of seven male high school seniors to the winner.

The National Distinguished Young Woman program has impacted lives of young women. There are still 18 local programs in Indiana and over 180 contestants compete in the programs. There are nearly $70,000 in cash scholarships offered in Indiana and approximately $22,000 at the state level. Since its inception the program has provided over $15 million in college scholarships for Indiana contestants.

Provided to WTCA by our news partners at InkFree News powered by The Papers Inc.