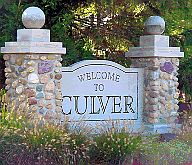 09/14/12 The Culver Town Council met for an Executive Meeting on Tuesday, September 11th at 5:00 p.m. in the Town Hall. The executive meeting is a private meeting for town council members and allows them to discuss matters without an audience. The public and/or press are excluded from these proceedings. The Town Council then had a very short public meeting at 6:30 pm directly following the executive meeting. They unanimously passed ordinance 2012-004 to amend the language allowing for an agricultural district in zoning. They also unanimously agreed to pay the $6,655.33 that has gone over budget on the Safe Routes to School project. The department managers gave their reports and Bob Porter informed the council that Reith Reilly and INDOT would be starting the South Main Street Project soon with a completion date scheduled for November 23rd.

The Town Council also expressed an interest in hearing what the citizens feel about the patio dining presently outside of Cafe’ Max. Because the permission given for the patio was just for a trial bases, the council would like to hear from the citizens of Culver prior to another vote. The public can call Town Hall or put their opinions in writing, which the Town Council would prefer.