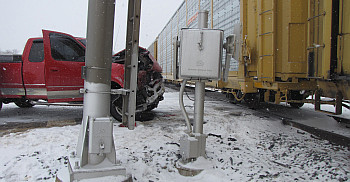 03/07/14  On Wednesday, March 5th at approximately 11:03 A.M. officers with the Marshall County Sheriff’s Department were dispatched to a car verses train accident on State Road 331 near Illinois Street in Tippecanoe.

As Officer Travis O’Neal arrived on the scene he learned that 42 year old Tracia S. Blackman of Fulton County was driving a Ford F-150 northbound on US 331.   As she approached the railroad crossing she saw the crossing arms down and the red lights flashing indicating a train was approaching. Blackman said she attempted to stop the vehicle but claimed the vehicle slid on the snow covered roadway striking the railroad crossing arm. The vehicle continued to slide northbound striking the first engine of the train on the right side.  The vehicle was pushed into a clockwise spin by the train and came to rest on the south side of the railroad tracks facing north east with both the airbags being deployed.

The Norfolk Southern Train was 43 cars long and had departed from Chicago, IL en route to Fort Wayne. The engineer, Andra L. Lymon along with the conductor, Todd S. Smith stated they looked back and observed the truck drive through the crossing arm and strike the engine midway down.   The emergency braking system was applied bringing the train to a stop.

Tricia Blackman was seen by EMS but refused treatment on the scene and the engineer and conductor were not hurt in the crash.