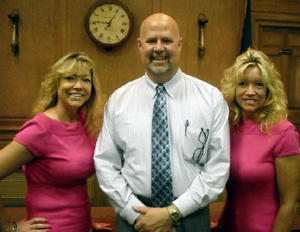 Plymouth Mayor Mark Senter turned over the reins of the city, so to speak, to twin sisters Karen Harvey and Sharon Grigsby.

The two won the honorary titles after bidding at auctions for “Mayor for the Day” prizes. Harvey purchased hers at the “Dancing With the Stars” event and Grigsby won hers by calling in to WTCA am1050 Radio during a fundraiser for “Shop With a Cop.”

Grigsby said, “We wanted to see a different aspect of how this community is taken care of and how the Mayor interacts with the public.”

Mayor Senter took the pair to the various city departments.

Grigsby added, “We knew a lot of the people we saw who work for the city. We now know how important they are to our community.”

The sisters also accompanied the mayor to a private home in response to a concern, observed a sidewalk replacement and went to an informational meeting and luncheon at Christos’ Banquet Hall.

Mayor Senter said during his time in office, no adult has ever used the “Mayor for a Day” until now.

The sisters tried to coax Mayor Senter into trading jobs with them for a day too, but so far he has declined. Harvey has owned and operated Taxi Express for the last seven years. Grigsby said, “Karen is on call 24/7.” Grigsby opened Kid Club Daycare and Preschool 18 years ago.
Grigsby said, “We are no strangers to hard work. Our mom raised us this way.”  She added, “If we wanted something, we had to go out and get it,” also saying, “We appreciated the fact that Mayor Senter was interested in our lives and work as well.”

Harvey recently joined the Rotary Club and Grigsby is looking forward to joining a local organization in the near future. “We have done a lot of volunteering and usually just want to stay in the background,” Grigsby said.

The twins are used to doing things together. They had a double wedding and delivered babies only one day apart.

During their time as honorary mayors, they even dressed alike.

Harvey and Grigsby are the daughters of Jim Klingerman and Cora Kruzick.