Secretary of State in Plymouth to Promote Vote Centers 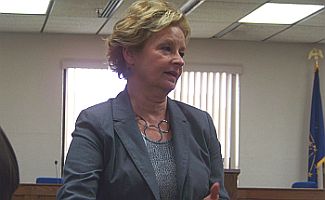 04/12/13  In 2007 Indiana legislation allowed three counties, one small, one medium and one large to pilot the use of “vote centers” instead of the traditional precincts.  Since that time legislation has passed to allow counties to make their own determination on the idea of “vote centers.”   Simply put, a vote center is a polling place where any eligible voter in the county may go to vote. The vote center model gives voters more flexibility on Election Day because they are not constrained to a specific polling location. Vote centers are connected through secure internet connections, and as ballots are cast, an electronic poll book is instantaneously updated.

Secretary of State Connie Lawson hosted a regional meeting for County Clerks and Voter Registration Clerks in Plymouth this week to explain the concept and benefits of vote centers.

During the power-point presentation Lawson said vote centers are less expensive to operate due to the fact that fewer poll workers are needed and many times fewer voting machines are needed.  She also noted that vote centers make it more convenient for voters since there is no wrong place to vote.  This gives votes flexibility on where they want to vote.  Some counties currently using vote center are locating them in popular sites such as malls and restaurants. 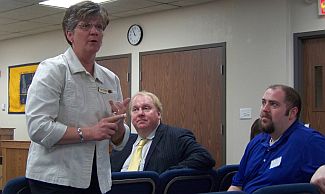 Cass County Clerk Beth Liming said they were one of the pilot counties.  The switch from precincts to vote centers has reduced election costs by half.  She mentioned how easy it is to find poll workers now.  Liming also discussed the process they went through to educate the voters on the changes using the media, posters and postcards.

Marshall County Election Board member Nelson Chipman said, “The board is considering vote centers.  Precincts would remain.  They are not just automatically wiped out but vote centers would be where people would vote.  Voters would still be identified from which precinct they came, but that would not be as important as it has been.”