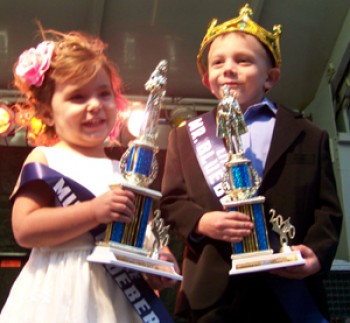 The official opening of the Marshall County Blueberry was Friday evening at 5 p.m.

When looking at the Board of Directors, Burroughs noted that many are older.  This year the board decided to create a Junior Board as an attempt to build leadership. Junior members represent many of the schools in the county.  Members include: Kayla Arriga, Jake Bessinger, Adam Lacefield, Wil Rettinger, Zack Smith, Kelli-Jo Stachurski, Kancace Terry, Austin Walesiewicz, and Jacob Whaley.

The theme of this year’s festival is “School Spirit.”  Burroughs then introduced the Argos High School Choir who sang the national anthem. 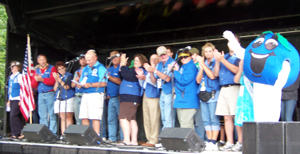 Following opening ceremonies was the Little Miss & Mr. Blueberry competition on the Michigan Street Stage.  15 boys and 49 girls were paraded on stage in their very best dress.  Each won was asked what they wanted to be when they grew up.  They were also asked what they would want if they had three wishes.  When all was said and done, 5 year old Dalton Byrd of Plymouth was chosen as Little Mr. Blueberry while Lillyannah Johnson was chosen as Little Miss Blueberry. 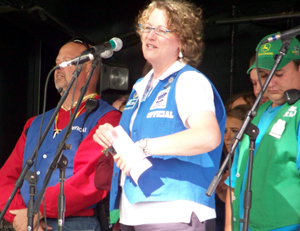 The cooler weather didn’t stop the crowd.  By 5 p.m. Centennial Park was full of families heading out to find something delicious to eat for dinner, find just the right yard ornament or even purchase a sweatshirt to stay warm and of course enjoy all the rides at the carnival.