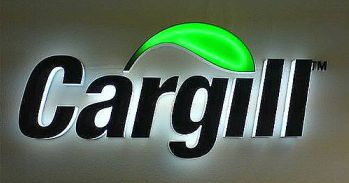 09/05/12 Monday morning the Marshall County Commissioners again considered the request of Cargill Inc. in LaPaz to rezone 8 properties from T-1 (Town residential) to I-2 (Heavy Industrial).  The company, located at 321 West 1st Road on the northwest side of LaPaz purchased several lots a few years ago and only recently realized their on-ground storage facility on several of those lots were not zoned properly.

At the August 20th meeting several neighbors spoke-out against the rezoning, noting that a thick dust is present when corn is in the on-ground storage facility.  The dust can be a thick as a eighth of an inch and ends up on their vehicles, homes and things setting outside.  There were also concerns that the dust was plugging up the filters on the AC and heating units.

Branson Woodward, a manager from Cargill explained that they must abide by the Clean Air Acts.  He does try to reduce the dust problem by applying oil to limit some of the dust.

Plan Director Ralph Booker told the commissioners that the Plan Commission considered the rezoning request and voted 3 in favor, 2 against and 1 abstention so it came to them with no recommendation. The rezoning also has written commitments on the lots for a grain elevator and handling with crop services and inputs.

The commissioners did not act on the request.

At yesterday’s meeting the Commissioners asked Woodward how his conversation with the neighbors went.  He said, “I think we have found a way to live together.”  He said they understand that I can’t get rid of all the dust and I learned their major concerns.”     He explained his plans to plant a couple rows of pine trees as a buffer, install better mufflers on the fans and use a wind sock to watch the prevailing winds and if they are over 5 mph shut down operation. Cargill also offered a couple of carwashes to the homeowners.

Neighbor Roy Harder said after their meeting with Woodward the neighbors had a meeting.  He continued, “We have some agreements… but we would like them to have the outside of our houses cleaned.”  He also said the noise from the fans keep people who have to get up and go to work awake.

Commissioner Jack Roose piped up, “Two weeks ago it was all about the dust, now you are bringing up the fan noise?”

The county attorney will present a zoning ordinance and it’s anticipated that the commissioners will pass it on all three reading during their September 17th meeting.