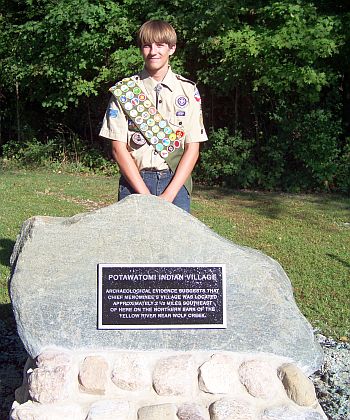 Borggren, a freshman at Plymouth High School decided his project would be cenerted around Chief Menominee.

More than two dozen people attended the special service at was held at the Chief Menominee statue on Peach Road.  The ceremony was to dedicate a new marker to designate the Chief’s village.   Borggren built and placed the new marker at the foot of Chief Menominee’s Statue.

The marker is the result of the archeological digs and research of by Professor Mark Schurr and his assistant Ben Segunda from Notre Dame University in 2000 and 2002. Evidence indicates the location of Chief Menominee’s village was on the Yellow River about 2 miles southeast of the Chief’s statue on private property in the Wolf Creek neighborhood. 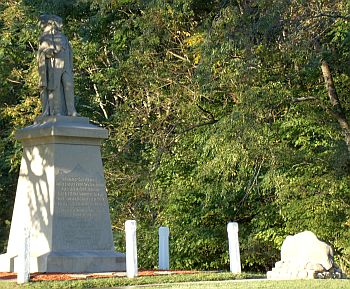 Tylor thanked all those who helped with the projects that included the new marker, the improvements to the monument at the Menominee Chapel and the Trail of Death marker on State Road 17 at 12th Road.   He also said a special thank you to his grandfather, Ray Borggren who gave him the idea for his Eagle Scout Project.

During the ceremony Mrs. Shirely Willard from Fulton County spoke about the research the professor did locating the village and George Schricker sang the song he wrote about Chief Menominee.  Dr. George Godfrey of the Citizen Potawatomi Nation blessed the three markers and Reverend Denise Anderson gave a prayer. 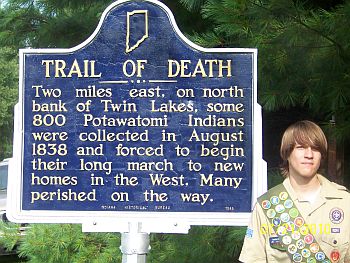 Tylor Borggren is the son of Sherri and Kent Borggren