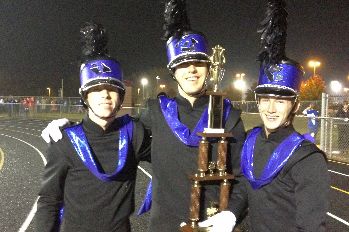 10/16/12 Despite the down-pouring rain and gusting winds, the Pride of Plymouth Marching Band rehearsed outside on Saturday morning to help prepare for the evening performance at the Indiana State School Music Association’s Regional Competition.   This event determines which bands move on to the final round of competition leading into the state finals.

“The weather was not cooperating with us and we spent most of the morning practicing in the rain and wind,” said band director Bryan Ames.  “The kids were absolute troopers and just kept working to their fullest potential despite the weather.  That day was just too important to the kids to let Mother Nature rule over our preparations.  Knowing that only ten bands would be advancing from a large field of competitive groups was a driving force in our morning rehearsal.  The kids were just outstanding.”

Upon arrival at Chesterton High School for the Regional tournament, it was still raining and the bands in Class D competition had been performing in the rain all morning.  “It is very scary for most modern marching bands when we face weather like this.  Rain does not mix well with our microphones, sound system equipment, and computers that operate our sound system.   We have to be prepared for this weather with protective tarps and covers for all of our equipment,” said Ames.  “Even as we were walking the band to the warm up area just moments before our performance, it was still raining on us.”  The weather did cooperate for the band though, and the rain stopped before the band made it into the music warm up.  Chesterton High School has a brand new artificial turf stadium floor and weather would not effect the band’s performance in the stadium.  “It is great to know that even with all the rain, the field would have no mud on it.  The latest generation of artificial turf has black rubber powder in it to simulate dirt.  It provides a lot of traction and keeps your feet from slipping in the rain.  It is a great environment to perform in.”

After the bands had performed, division ratings and qualifying bands were announced in performance order.  Since Plymouth performed near the end, they were one of the last finalists announced.  Junior band member Taylor Scott said, “I couldn’t help but remember last season when they didn’t call our name as a semi-finalist.  That memory kept running through my head and I didn’t want this season to end like that.  When they called our name, a heavy burden was lifted and I was extremely excited.”   Ames said he felt similar emotions remembering “last year was just a disappointment to not hear our name called.  We had just been a state finalist in Class C the year before.   Moving back up to Class B and being the smallest school in our class was a true challenge, but this year the kids just worked a lot harder to make a name for themselves in Class B.   Hearing our name called off as a Class B semi-finalist was amazing and such a relief.  These kids have worked so hard this season to be better and it is was a blessing for them to be rewarded for the dedication they have put into this show.”

The band will now perform at Pike High School on Saturday, October 27th where the final 20 bands (10 from the North and 10 from the South) will meet up in one last event leading into the state finals.  The overall top ten bands will be announced to continue on to the state finals.  “Plymouth has never made state finals in Class B.  We made it to finals in Class C in 2010, and now it is our goal to do the same as the smallest school in our class.  To say that we could accomplish this in Class B would be a tremendous statement of the work ethic these kids have put into this season.   We are hoping that we have a large fan turn-out for this event in two weeks to cheer the kids on.”

Congratulations to the Pride of Plymouth for advancing to the ISSMA Semi-State competition and good luck as they prepare and continue to work towards this event.  Performance information can always be found on the band’s website at   www.prideofplymouth.com.

Photo:  drum majors with the Regional trophy that sent them on to Semi-State.  (l-r)  Patrick Gouverneur, Jacob Harley, Jack Garrison (all seniors).