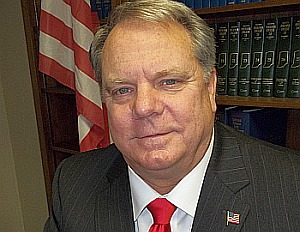 12/10/13 E. Nelson Chipman, Jr. announced Monday his candidacy for the 2014 Republican nomination to the office of Prosecuting Attorney of Marshall County.  The Prosecutor’s Office is responsible for representing the State of Indiana in all criminal matters arising in the county, and includes a Child Support Division responsible for ensuring parents honor their child support obligations.  The Prosecutor’s Office also pursues juvenile delinquency matters and mental health commitments.   Chipman is currently the Chief Deputy Prosecutor to David R. Holmes, where he serves as the chief trail attorney for all major felony cases. Holmes previously announced his intention to retire and not seek re-election.

Chipman, 59, is a live–long Marshall County resident. He graduated from Plymouth High School, Indiana University, attended the Graduate Institute of Criminal Justice and Criminology, at the University of Maryland, and Valparaiso University of Las, where he was editor of the Law Review.  He was admitted in 1981 to the bar of the Indiana Supreme Court, and the United States District Court for the northern and southern districts of Indiana.  He also holds certification as a Senior Professional in Human Resources, and has been certified at numerous levels in the National Incident Management System by the US Department of Homeland Security.

Chipman has been a lawyer for over 32 years.  He previously maintained a private practice of law with his father, Eugene N. Chipman, Sr., for many years. Early in his career, Chipman was a public defender for several years and then was appointed deputy prosecutor under Fred R. Jones for 8 years.  He served as Plymouth City Attorney for over 16 eyras in the administrations of mayors William Satorius, Jack Greenlee, and Mark Senter.  He also served as Elkhart City Attorney for 8 years in the administration of David Miller.  During his time in Elkhart, Mayor Miller appointed Chipman to serve the dual role of City Attorney and Director of Human Services.  After proving instrumental in the reorganization of Elkhart city government, Miller appointed Chipman to serve as the city’s first Director of Public Safety, providing enhanced civilian oversight and strategic planning for the Elkhart Police Department, Fire Department and Communications Center.  For his efforts through the years, Chipman has been awarded four separate keys to the cities of Elkhart and Plymouth.

Chipman stated he plans during the campaign to emphasize his years of experience and his most recent focus on securing jury convictions and substantial sentences for methamphetamine manufacturing and other serious crimes.  “The overriding message of his campaign is that if elected, the enforcement of the law by my administration shall continue to be firm, fair and evenhanded.”

Chipman is the author of numerous articles and presentations on government organization and personnel management, and is considered a leading expert in Indiana on police and fire disciplinary procedures.  He also authored a law review article on the Indiana death penalty.  He is formally a member of the Indiana Municipal Lawyers Association, where he served on its board of directors and later as Vice President and President in 2011.  He also served on the board of directors for the Indiana Association of Cities and Towns, where he was a member of its Legislative Review Committee.

Locally, Chipman chairs the recently formed Sexual Assault Response Team, and Represents the Prosecutor’s Office on the Child Protective Team.  He is a current member of the Indiana Bar Association, the American bar Association, and the Marshall County Bar Association, where he served a Treasurer, Vice-President, and President.  Chipman currently serves a President of the Marshall County Election Board, from which he must now resign since he is an announced candidate.  He is a member of the National District Attorney association.  He is also a member of the Indiana Prosecuting Attorneys Council and recently assisted the organization in its massive undertaking of re-writing the criminal code with the objective to first and foremost serve and protect the citizens of Indiana