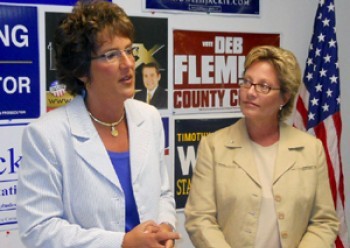 The National Right to Life Political Action Committee has announced their endorsement of Republican Jackie Walorski in the race for the 2nd District Congressional seat.

In the endorsement letter sent to Walorski, the National Right to Life wrote “You are a strong advocate for life. You have supported and sponsored pro-life legislation, and voted for its passage. And you oppose the use of federal funding for elective abortion. Your opponent, Joe Donnelly, voted to enact health care legislation that will provide government funding for health plans that pay for abortion on demand, and promote the rationing of lifesaving medical treatments.”

The letter concludes by saying, “Your exemplary pro-life record should earn you the support of all voters who are concerned with the right to life and with the protection of the most vulnerable members of the human family.”

Walorski accepted the endorsement and promised to continue the fight in Washington.

“The fight for life is a critically important issue and Hoosiers deserve leadership in Washington that reflects that,” said Walorski. “When Rep. Donnelly voted for the health care bill, he promised Hoosiers that federal funds would not go to pay for abortions. But since that vote groups on both sides of this issue have acknowledged that this is simply not the case.”

“I have been a frontline fighter against Planned Parenthood and the use of taxpayer dollars for abortions in Indiana and I will continue that fight in Washington.”